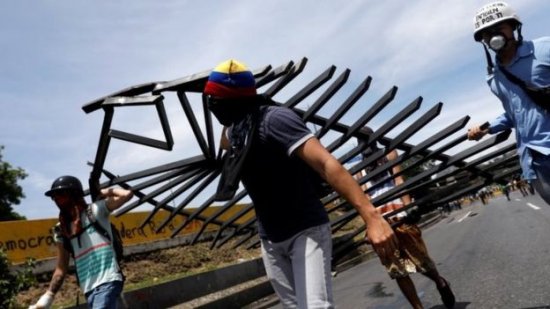 A teenager has been killed in Venezuela during another day of mass protests against President Nicolas Maduro, officials say.

Luis Alviarez, 18, was hit in the chest during clashes with police in the western state of Tachira.

Opposition activists say another protester was also killed in the state.

They been protesting almost daily for seven weeks to demand early elections and an end to the country’s deep economic crisis.

Nearly 40 people have been killed since the unrest began.

President Maduro has accused the leader of the opposition-led National Assembly, Julio Borges, of inciting violence by calling people on to the streets.

The unrest was triggered by a Supreme Court attempt to take over powers from the assembly on 29 March.

It reversed its decision a few days later but by then the opposition had seized the momentum.

Despite having the world’s largest known oil reserves, Venezuela is facing a shortage of many basic items, including food and medicines.

Its economy has collapsed, with inflation expected to top 700% this year, and crime is rampant.

The opposition says the socialist governments of Mr Maduro and his predecessor, the late Hugo Chavez, have mismanaged the economy since coming to power in 1999.

It is calling for early elections and the release of opposition politicians jailed over the past few years.

Mr Maduro accuses the country’s business elite of boycotting the economy to create unrest and topple his democratically elected government. His term ends in January 2019.