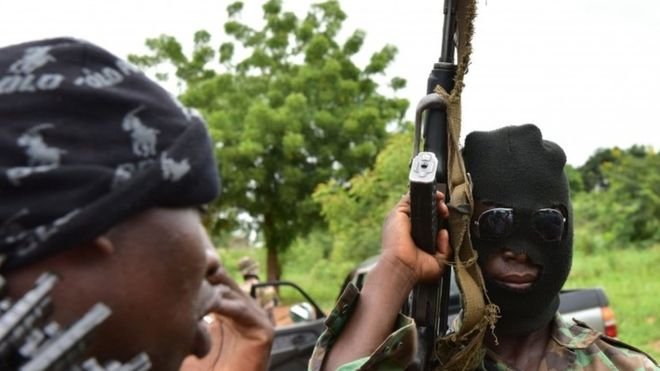 Mutinous soldiers have opened fire in four big cities in Ivory Coast, defying a government order to lay down their weapons.

Shots rang out near the presidential palace in the main city, Abidjan, the second city, Bouaké, and in cities vital to the cocoa industry.

The mutineers, who helped the president take office in 2011, have been locked in a pay dispute with the government.

Pro-government forces have backed off from advancing towards Bouaké, the epicentre of the mutiny, apparently because they want to avoid a fight, reports the BBC’s Tamasin Ford from Abidjan.

An operation had been launched because some soldiers were continuing to disobey orders, he said.

The mutineers said they would fight back if loyalist troops intervened.

Mutineers at the army headquarters in Abidjan’s financial district, near the presidential palace, have been shooting in the air, forcing schools and offices to shut, our reporter says.

Gunfire was also heard at the Akouédo barracks, in a suburb where many middle-class Ivorians and expats live, she says.

The mutinous soldiers spilled out on to the roads, causing panic, our reporter adds.

Pro-government forces have responded by closing roads in the city, while French troops have been deployed to guard French-owned transport firm Bolloré, a major investor in Ivory Coast.

Sustained gunfire also broke out at the entrance and centre of Bouaké, which for many years was the main rebel-held city.

One person was killed by a stray bullet on Sunday after mutinous troops seized control of Bouaké.

Other areas hit by unrest include San Pedro, the biggest cocoa exporting city in the world, and Daloa, a major trading hub in Ivory Coast’s cocoa belt.

“The soldiers are in the streets on foot and on motorbikes. They’re shooting in the air,” Reuters news agency quoted resident Aka Marcel as saying.

It is unclear what impact the unrest will have on the cocoa industry.

The government is already running short of money because of plummeting cocoa prices, making it difficult for it to meet the demands of the mutineers, our reporter says.

The mutiny has raised fears of a resurgence of the violence seen during Ivory Coast’s 10-year civil war, which ended in 2011.

Pro-Ouattara forces from Bouaké swept into Abidjan at the time, helping Mr Ouattara take office after his predecessor Laurent Gbagbo refused to accept defeat in elections.

Many of the rebels were rewarded for their backing by being given jobs in the army.

Related Topics:AbidjanAfricaBouakéIvory Coast
Up Next