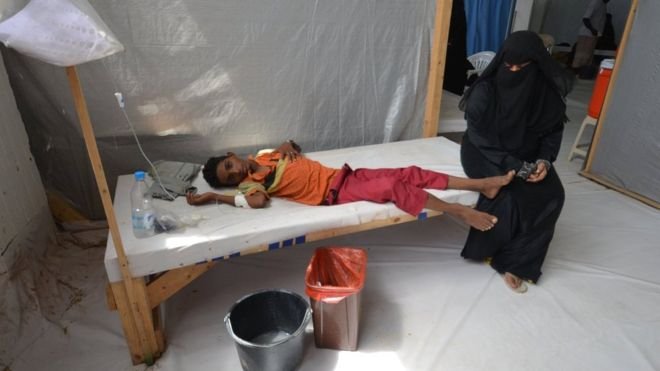 A state of emergency has been declared in the Yemeni capital, Sanaa, after an outbreak of cholera killed scores of people.

Hospitals in the city, which is controlled by Houthi rebels, are crowded with cholera patients.

The Red Cross says the number of suspected cases in the country has tripled in a week to more than 8,500.

Yemen has been ravaged by hunger and civil war, allowing disease to spread rapidly.

Two-thirds of the population do not have access to safe drinking water, according to the UN.

Dominik Stillhart, director of operations at the International Committee of the Red Cross, told a news conference in Sanaa on Sunday that there had been 115 deaths from cholera nationwide from 27 April – 13 May.

“We now are facing a serious outbreak,” he said.

Sanaa has been worst hit, followed by the surrounding province of Amanat al-Semah, the World Health Organisation (WHO) says.

Cholera is a water-borne disease that is transmitted through contaminated water and food.

Symptoms include acute diarrhoea and vomiting. People with cholera can become very sick and, if left untreated, death can occur within hours.

It is the second outbreak of cholera in Yemen in a year.

The WHO said last week that fewer than 45% of health facilities in Yemen were fully functioning.

Almost 300 hospitals or clinics have been damaged or destroyed in fighting between forces loyal to President Abdrabbuh Mansour Hadi – who is backed by a Saudi-led multinational coalition – and those allied to the Houthi rebel movement.

The civil war has also left 18.8 million people in need of humanitarian assistance.

Ivory Coast mutiny: Shooting in Abidjan, Bouaké and other cities