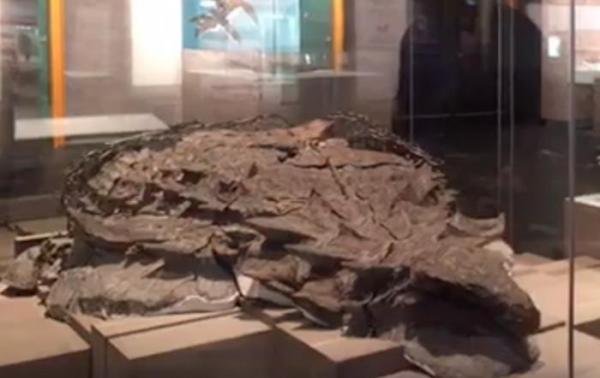 The world’s best preserved dinosaur fossil went on display in Canada six years after it was accidentally found by a shovel operator.

Alberta’s Royal Tyrrell Museum of Palaeontology placed the incredibly well-preserved remains of the 112-million-year-old nodosaur on display as part of its new Grounds for Discovery exhibit, dedicated to fossils that were discovered through industrial work.

“Staff at the Royal Tyrrell Museum and our colleagues at the Royal Alberta Museum have been working for several decades to educate industry on the importance of preserving and protecting fossils uncovered by industrial activities,” executive director Andrew Neuman told the CBC. “This exhibit highlights some of the results of this collaborative approach to heritage preservation.”

The fossil, believed to be Alberta’s oldest, was unearthed after Suncor shovel operator Shawn Funk spotted a large lump of dirt with an odd texture and a diamond pattern and contacted a geologist.

The nodosaur’s body was submerged at the bottom of the sea, where minerals kept all of the dinosaurs gut contents intact inside its gradually fossilized skin and armor.

“It’s basically a dinosaur mummy — it really is exceptional,” said Don Brinkman, director of preservation and research at the Royal Tyrrell Museum.

Thousands of cubic meters of soil, gravel and bedrock are excavated yearly in Alberta, which leads to regular discoveries of fossils and other buried remains.

“These are specimens that would never be recovered otherwise,” Brinkman said. “We get two or three significant specimens each year.”