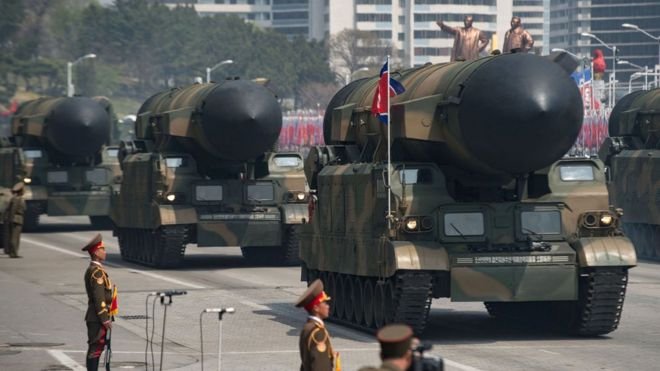 North Korea has carried out another ballistic missile test days after a new president took office in the South.

The missile was launched near north-western Kusong, flying hundreds of miles then landing in the Sea of Japan.

It puts immediate pressure on South Korea’s President Moon Jae-in, who campaigned on a platform of better engagement with the North.

A series of North Korean missile tests this year has sparked international alarm and raised tensions with the US.

After hosting an emergency meeting of his security council, Mr Moon condemned the latest launch as a “provocation”.

“The president said while South Korea remains open to the possibility of dialogue with North Korea, it is only possible when the North shows a change in attitude,” his spokesman said.

The nature of the launch is still being determined, but analysts have said the test shows a longer range than previously tested devices.

The Japanese defence minister said it fell about 400km (250 miles) from the east coast of North Korea and could be a new type of missile, Reuters reported.

The US Pacific Command said in a statement the type was being assessed but that its flight was not consistent with that of an intercontinental ballistic missile [ICBM], which would have the range to reach the US mainland.

It added that the new launch should serve as a call for stronger sanctions against North Korea.

North Korea is believed to be developing two types of ICBM, but neither has so far been flight tested.

China, North Korea’s only major ally, called for restraint in the wake of the latest test.

The North Korean situation has been likened to the Cuban missile crisis in slow motion.

In October 1962, aerial pictures showed that the Soviet Union was building a missile base on Cuba, just off the coast of Florida.

President Kennedy said he would not accept that. It was what would now be called a “red line”. In the face of a credible threat of war, the Soviet leader Khrushchev backed down.

It is not clear where Mr Trump’s red line is or whether he could enforce it short of a truly devastating war, possibly with China drawn in.

He has said that North Korean missiles capable of hitting the US mainland “won’t happen”. Recently, he has mentioned talking to Kim Jong-un but also warned that North Korea risks a “major, major conflict”.

There is also a new president in Seoul keen on dialogue. As the missile tests continue, it is not clear when or if Washington would decide on military action – or whether Seoul would try to block it.

The North has conducted five nuclear tests despite UN sanctions and is also developing long-range missiles.

It is reported to be continuing efforts to miniaturise nuclear warheads and fit them on missiles capable of reaching the US.

Washington has accused other UN Security Council members of not fully enforcing existing sanctions against the North, and has urged China in particular to use its trade links as influence.

But despite poor relations, North Korea recently said it would hold talks with the US “if the conditions were right”.

The comments, by a senior North Korean diplomat, came after US President Donald Trump said he would be “honoured” to meet the North’s leader, Kim Jong-un.