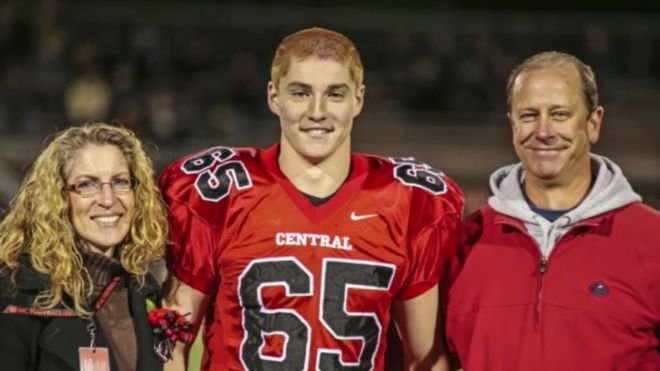 The lawyer for the family of a student who died after falling down stairs during a fraternity initiation has called the group’s actions “grotesque”.

Timothy Piazza, 19, died in February after he became drunk during a “pledge” event for a fraternity, which is a social club for male students.

Mr Piazza, who was left unconscious for hours, suffered internal injuries before he died in hospital.

Prosecutors charged 18 students at Penn State University over his death.

The charges came after months of a grand jury investigation, which included video from surveillance cameras, testimony and phone records from Mr Piazza’s final hours inside the fraternity house.

The report concluded that there was an attempt to conceal evidence of hazing – the initiation ceremony – and underage drinking after Mr Piazza was in hospital.

Piazza family attorney Tom Kline called the footage the “worst possible debauchery and depravity that you could possibly have anywhere, let alone a college campus”.

He added the family “saw his bright future blossoming and then it all disappeared by the grotesque actions of people who were supposed to be his friends”.

Throughout the evening, Mr Piazza and other students participated in binge-drinking activities before he fell down a flight of stairs.

In a group text message just before midnight, one of the fraternity members wrote: “Also, Tim Piazza might actually be a problem. He fell 15 feet down a flight of stairs, hair-first, going to need help.”

After the fall he was slapped in the face, shaken and thrown onto a couch, where he remained for most of the night, according to the grand jury report.

In the early hours of 3 February, members of the fraternity carried Mr Piazza to another couch after finding him on a basement floor with blood on his face, the report said.

At about 10:48 local time (14:48 GMT), a fraternity member called the police. Mr Piazza was taken to hospital and died the next day.

Mr Kline said the footage showed “horrific acts of self-preservation” and “acts of callousness toward a young man”.

He continued the students “aggressively and affirmatively” made sure Mr Piazza did not receive medical attention because they could have got into trouble for underage drinking.

“He was the unfortunate road kill in this adventure by these young men who thought that they were above the law,” he said.

The grand jury report also underscored the fraternity culture at Penn State, placing “direct fault” on the school’s entire fraternity community for nurturing “an environment so permissive of excessive drinking and hazing that it emboldened its members to repeatedly act with reckless disregard to human life”.

Beta Theta Pi, which has since suspended and disbanded its Penn State chapter, called the charges “incredibly disheartening”.