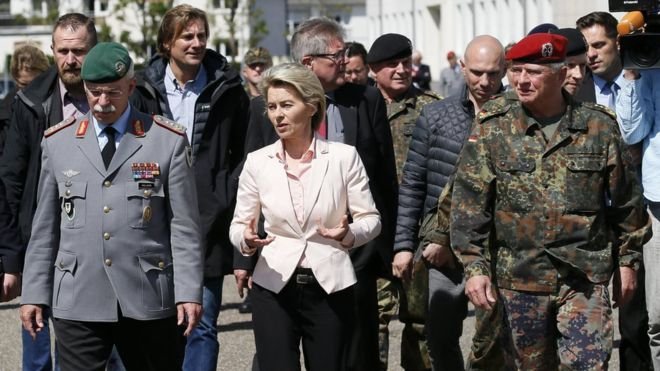 German authorities have made another arrest linked to an alleged plot to murder a senior public figure.

The man, a soldier, is accused of conspiring with another army officer who had falsely registered as a Syrian refugee, and a student.

The suspected right-wing extremists wanted to frame refugees for the attack, say prosecutors.

The affair has sparked a national debate about right-wing extremism in Germany’s armed forces.

On Sunday, inspections were ordered at every army barracks after Nazi-era memorabilia were found at two of them.

On Tuesday, German police detained 27-year-old “Maximilian T” in Kehl, across the Rhine river from the French city of Strasbourg.

“The accused is strongly suspected of planning a severe act of violence against the state out of a right-wing extremist conviction,” the prosecutor’s office said in a statement.

The man was stationed at a barracks in France, alongside another man who was arrested in April, 28-year-old “Franco A”.

He was arrested in April, after police discovered he had registered as a Syrian refugee at a shelter in central Germany in December 2015 and later officially requested political asylum in Bavaria.

A student, 24, named as “Mathias F” has also been arrested.

The three “planned an attack against a high-ranking politician or public figure who was supportive of what the accused saw as the failed immigration and refugee affairs policies”, prosecutors said.

They had drawn up a hit list and acquired a pistol for Franco A to carry out the attack, they said. Maximilian covered up his accomplice’s absences from barracks in pursuit of the plot, prosecutors suspect.

The country has experienced a backlash against Chancellor Angela Merkel’s “open-door” policy which saw Germany take in more than one million asylum seekers in 2015.

Emmanuel Macron to be sworn in as French president