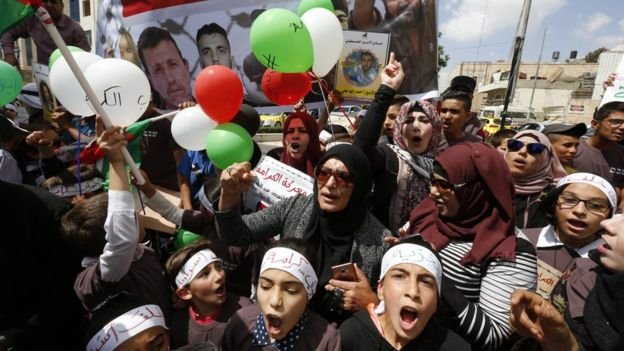 Israel’s prison service has released a video purportedly showing the leader of a three-week-old hunger strike by Palestinian inmates eating in his cell.

The service said Marwan Barghouti had been filmed consuming cookies in secret on 27 April and a snack bar on 5 May.

It did not say how he obtained the food, but sources told the Haaretz newspaper that he had been set up.

Barghouti’s wife said the footage was “fake” and intended to break the morale of the hunger strike’s participants.

More than 890 prisoners have been refusing food since 17 April in protest at conditions in Israeli jails.

They have issued a list of demands including better medical services, more frequent family visits and an end to detention without trial.

The nine-minute surveillance video released by the Israel Prison Service on Sunday shows a man identified as Barghouti, who was convicted on five counts of murder by an Israeli court in 2004, moving about inside a cell.

The first part, dated 27 April, shows the man opening a white envelope and inspecting its contents before sitting down in the cell’s toilet and closing the door. The view is obstructed, but the prison service said the envelope contained cookies.

The second part, dated 5 May, shows the same man opening another envelope, walking to the toilet, and taking out what the prison service said was a snack bar. This time the door is left open and the man appears to unwrap the bar, break off a piece and bring it to his mouth.

The man is then apparently shown eating a packet of salt.

“This hunger strike was never about the conditions of the convicted terrorists, which meet international standards,” said Israeli Minister of Public Security Gilad Erdan. “Barghouti is a murderer and hypocrite who urged his fellow prisoners to strike and suffer while he ate behind their back.”

The head of the Palestinian Prisoners’ Club, Qadoura Fares, called the video a fabrication, stressing Barghouti was being held in solitary confinement at Kishon prison and had no access to food.

“This is psychological warfare that we expected Israel to wage against the strike,” he was quoted as saying by the Associated Press.

Barghouti’s wife, Fadwa, said Israel was “resorting to despicable acts” and warned that they would “increase the prisoners’ insistence on continuing”.

Barghouti is the former leader of the Fatah movement in the West Bank and chief of its armed wing, the Tanzim.

His trial during the second Palestinian intifada, or uprising, turned him into household name and he enjoys widespread support among many Palestinian factions.

The 57-year-old has been touted as a possible successor to Palestinian President Mahmoud Abbas.