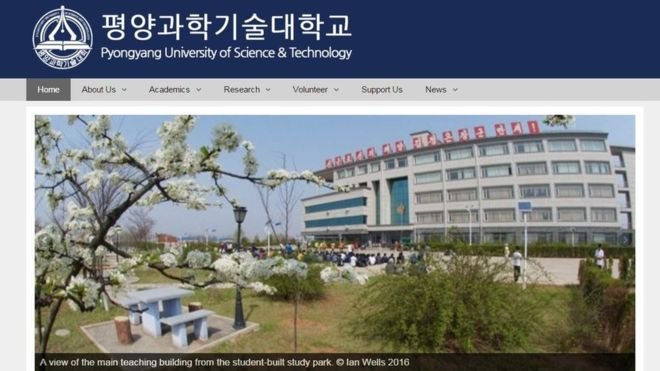 North Korea says it has detained a US citizen on suspicion of “hostile acts” against the state.

Kim Hak-song worked at the Pyongyang University of Science and Technology (PUST) and was held on 6 May, state-run news agency KCNA said.

Three other US citizens are currently held in North Korea, including Kim Sang-duck, who had taught at PUST.

The US has in the past accused North Korea of detaining its citizens to use them as pawns.

KCNA said that “a relevant institution” was “conducting [a] detailed investigation” into Kim Hak-song’s alleged crimes.

It gave no further details.

A State Department official said Washington was “aware of reports that a US citizen was detained in North Korea”, adding it would liaise with the Swedish Embassy in Pyongyang, which helps look after US interests in North Korea.

Kim Hak-song had previously described himself as a Christian missionary who intended to start an experimental farm at PUST, Reuters news agency reported, citing an online post by Mr Kim.

PUST is a university that mostly teaches the children of North Korea’s elite.

It was founded in 2010 by a Korean-American Christian entrepreneur, with much of the costs funded by US and South Korea Christian charities.

Several foreign lecturers are thought to teach at the university.

The detention comes amid heightened tensions between North Korea and the US.

Pyongyang has threatened to carry out a new nuclear test – while the US has sent a warship to the region and vowed to stop the North from developing nuclear weapons.

On Friday, North Korea accused US and South Korean agents of plotting to kill its Supreme Leader, Kim Jong-un.

The US and South Korean governments did not comment on the allegations, but experts were sceptical about the claim.

Kim Hak-song’s arrest makes him the fourth US citizen to be held by Pyongyang.

The other US detainees are:

Afghanistan IS head killed in raid