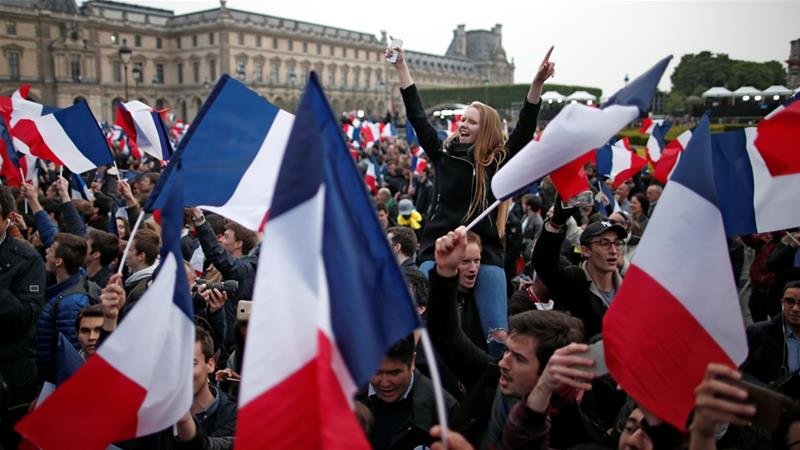 Emmanuel Macron was elected president of France on Sunday with a business-friendly vision of European integration, resoundingly defeating Marine Le Pen, the far-right nationalist who threatened to pull out of the European Union.

The centrist’s emphatic victory, which also smashed the dominance of France’s mainstream parties, will bring huge relief to European allies who feared another populist upheaval to follow Britain’s vote to quit the EU and Donald Trump’s election as US president.

Three projections, issued within minutes of polling stations closing at 8pm (1800GMT), showed Macron beating Le Pen by about 65 percent to 35 – a gap wider than the 20 or so percentage points that pre-election surveys had pointed to.

“A new page in our long history has turned tonight,” said Macron in a brief address to the press after the results were announced.

“I want it to be that of rediscovery of hope and trust.”

He promised to “fight the divisions that undermine France” and to “rebuild the links between Europe and its citizens”.

“He only just launched his political movement a year ago, and so many people at the time said he was too young, that he had no political experience … and here he is, one year on, France’s youngest president.”

Even so, it was a record performance for Le Pen’s National Front (FN), a party whose anti-immigrant policies until recently made it a pariah in French politics, and underlined the scale of divisions that Macron must try to heal.

Le Pen called to congratulate Macron shortly after news broke of her defeat, telling her supporters and members of the press she wished the new president “success” even though he faces “huge challenges”.

But, she added, her FN party needed to undergo a “profound transformation” in order to create a “new political force”.

The far-right candidate’s high-spending, anti-globalisation “France-first” policies may have unnerved financial markets, but they appealed to many poorer members of society against a background of high unemployment, social tensions, and security concerns.

The 48-year-old’s share of the vote was set to be almost twice that won by her father Jean-Marie, the last National Front candidate to qualify for a presidential runoff, who was trounced by Jacques Chirac in 2002.

Macron’s immediate challenge will be to secure a majority in next month’s parliamentary election for En Marche! (Onwards!), his political movement that is barely a year old, in order to implement his political programme.

However, at least one opinion poll published in the run-up to the second round has indicated this could be within reach.

EU Council President Donald Tusk also offered his congratulations, saying the French had chosen “liberty, equality and fraternity” and “said no to the tyranny of fake news”.