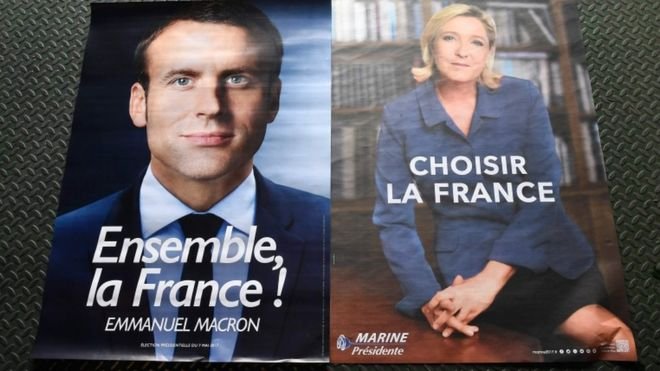 He gave no further details but said he knew of the risks of such attacks because they had “happened elsewhere”.

The French media and public have been warned that spreading details of the attack would breach strict election rules and could bring criminal charges.

A trove of documents – said to mix genuine files with fake ones – was released online shortly before campaigning ended on Friday.

Mr Hollande told Agence France-Presse on a visit to a cultural centre in Paris: “We knew that there were these risks during the presidential campaign because it happened elsewhere. Nothing will go without a response.”

He did not elaborate, but Mr Macron’s team has already been the victim of attacks which it blames on groups based in Russia and Ukraine, and last year’s US election campaign was also the subject of hacking attacks targeting the Democratic Party.

Mr Hollande added that he could not say whether the attack was an attempt to destabilise the election.

The BBC’s Hugh Schofield in Paris says the impact of the hacking attack on the vote is unlikely to be significant, as Mr Macron enjoyed a wide lead in opinion polls that were taken before campaigning ended.

Why is there a ban on spreading the data?

It is part of the restrictions that came into force at midnight local time on Friday.

No campaigning or media coverage of it that could sway the election is allowed until polls close at 20:00 local time (18:00 GMT) on Sunday. Some overseas French territories have already begun voting.

The election commission warned it could be a criminal offence to republish the leaked data.

Politicians and media are forbidden from giving details of, or commenting on, the leak.

The election commission said in a statement on Saturday: “On the eve of the most important election for our institutions, the commission calls on everyone present on internet sites and social networks, primarily the media, but also all citizens, to show responsibility and not to pass on this content, so as not to distort the sincerity of the ballot.”

Can a ban work?

Analysts say that, given the open flow of social media content, policing this could be impossible.

The French daily Liberation covered the leak by publishing a general Q&A with a journalist.

Le Monde said it would “not publish the contents before the second round”. It said it would vet and publish relevant material but “respecting our journalistic and ethical rules”. It also carried a general Q&A of the leaks.

Florian Philippot, deputy leader of Ms Le Pen’s National Front party, got a tweet in before the rules came in, saying: “Will Macronleaks teach us something that investigative journalism has deliberately kept silent?”

What data was released?

The documents were leaked on a file sharing website late on Friday. About nine gigabytes of data were posted by an anonymous user.

“The leaked files were obtained several weeks ago by hacking personal and professional email accounts of several officials of the movement,” it said in a statement.

How did the leaks spread?

The hashtag #MacronLeaks appeared on Twitter on an account used by a US alt-right figure on Friday afternoon – and was reportedly retweeted 87 times in the first five minutes, suggesting the use of automated bots to spread the information faster.

Within 90 minutes, the information had caught the attention of prominent supporters of Marine Le Pen and was further spread by bots.

Some three-and-a-half hours after the initial tweet, #MacronLeaks had been used some 47,000 times and the prominent Wikileaks account played a key role in publicising the hashtag.

Unclear. The Macron camp has not blamed any specific party but said the hack clearly aimed to damage it and undermine French democracy,

It compared it to the leak of Democratic Party emails in last year’s US presidential election that was blamed on Russian hackers.

Wikileaks, which published those emails, posted a link to the Macron documents on Twitter but implied it was not responsible.

Macron campaign servers went down for several minutes in February after attacks apparently originating in Ukraine.

Russia has denied that it is behind attacks aimed at Mr Macron.

What is at stake on Sunday?

France’s voters have rejected the two big political parties – the Socialists and the Republicans – that have governed for decades.

Voters will be making a decision on France’s future direction and on its place at the heart of the European Union.

If they opt for liberal Emmanuel Macron, they will be backing a candidate who seeks EU reform as well as deeper European integration, in the form of a eurozone budget and eurozone finance ministers.

If instead they choose far-right Marine Le Pen she promises quite the opposite. She wants a Europe of nations to replace the EU.

What are the battleground issues?

One of the overriding issues is unemployment, which stands at almost 10% and is the eighth highest among the 28 EU member states. One in four under-25s is unemployed.

The French economy has made a slow recovery from the 2008 financial crisis and all the leading candidates say deep changes are needed.

Marine Le Pen wants the pension age cut to 60 and to “renationalise French debt”, which she argues is largely held by foreigners.