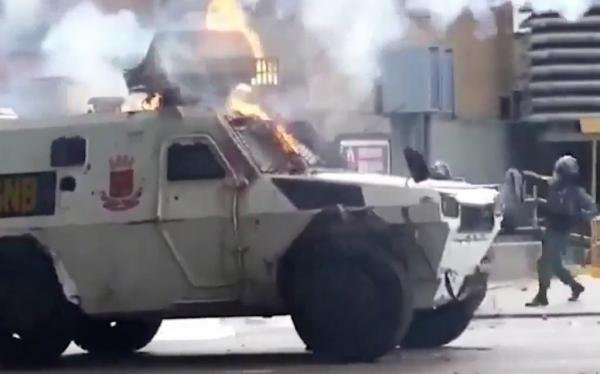 An armored vehicle ran over a protester in Venezuela as the violent demonstrations against President Nicolas Maduro continued.

Graphic video captured by a journalist at the scene in the Altamira neighborhood of Caracas showed the armored National Guard vehicle driving over 22-year-old Pedro Michell Yaminne as riot police fired what appeared to be tear gas at protesters who lobbed rocks and Molotov cocktails.

At least 36 people have been killed and 700 more have been injured in the protests that began on March 30 after Venezuela’s Supreme Tribunal of Justice, or TSJ, said it would assume the National Assembly’s duties and Maduro called for a new constitution in what the opposition stated is an attempt to sidestep an election in 2018.

Yaminne’s mother said he barely survived with multiple fractures and a collapsed lung after being run over by the truck, which had been set aflame by a Molotov cocktail moments before.

“He has opened his eyes and is communicating with hand signals,” said Yammine’s mother.

Interior and justice minister Nestor Reverol referred to the protesters as “terrorists” while stating the “lamentable” incident with Yaminne was under investigation.

Officials said another young man in his 20s, Hecder Lugo, died from a head wound after being shot during the protests.

Video also showed a small statue of Hugo Chavez in the town of Rosario de Perija being pulled down.

Protesters and government officials in Venezuela have engaged in daily clashes and a women’s march, called the Mothers of Venezuela March, is scheduled for Saturday.