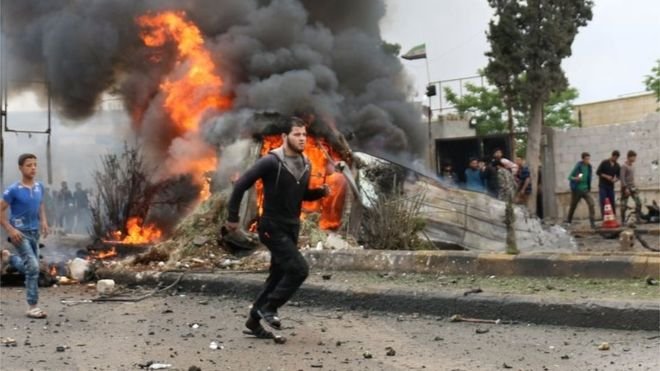 A deal to set up safe zones in Syria will come into force at midnight local time, Russia’s defence ministry says.

The accord on four zones was reached at Thursday’s talks in Kazakhstan between Russia and Iran which back Syrian President Bashar al-Assad.

Turkey, which supports Syrian rebel groups, agreed to act as a guarantor. Moscow says the US, the UN and Saudi Arabia also support the idea.

But the main Syrian opposition grouping says it has little faith in the deal.

In a statement, the High Negotiations Committee (HNC), said the plan lacked “safeguards and compliance mechanisms”.

The HNC also said it did not accept Iran as a guarantor of the deal.

It is unclear whether any of the rebels will abide by the ceasefire.

At Friday’s news briefing in Moscow, Russian Deputy Defence Minister Alexander Fomin said attacks by all sides in the “de-escalation” zones should halt from midnight (2100 GMT).

The objective is also to “provide the conditions for the safe, voluntary return of refugees” in addition to the speedy provision of relief supplies and medical aid.

The safe zones will remain in place for six months, the Kremlin has said.

Under the plan, the four zones will be established in:

Mr Fomin said that there had been no bombing raids by Russian aviation in the four zones since 1 May.

But he stressed that Russia’s air force would continue striking so-called Islamic State (IS) elsewhere in Syria.

The US also expressed concern over Iran, saying the country had “only contributed to the violence, not stopped it”.

The Syrian government is not a signatory, but its state news agency has said it supports the plan.

The talks were meant to shore up an oft-violated ceasefire which was originally agreed in December.

A partial cessation of hostilities was declared at the end of last year, but violence has continued on several fronts.

New front to retake Mosul from IS