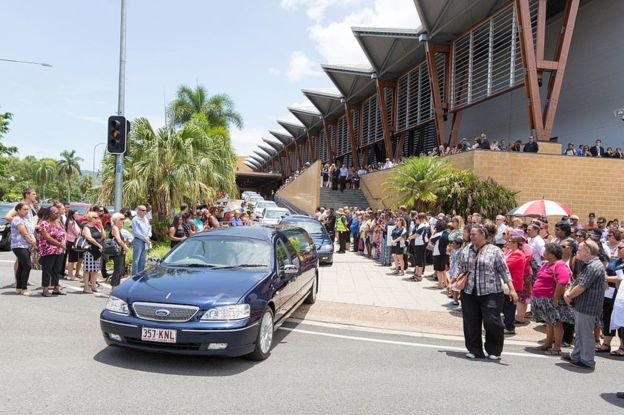 An Australian woman who killed eight children in a stabbing attack at her home will not stand trial because she was of “unsound mind” at the time.

Raina Thaiday was experiencing a psychotic episode when she turned on her four sons, three daughters and a niece in Cairns in December 2014.

The legal decision – made last month but only now made public – means she cannot be held criminally responsible.

Thaiday, 40, is being held at a high-security centre in Brisbane.

It is unclear if she will ever be released back into the community.

The house where the children, aged between two and 14, were killed has been demolished. It has been replaced with a park to remember Malili, Angelina, Shantae, Rayden, Azariah, Daniel, Rodney and Patrenella.

Schizophrenia at its worst

Thaiday, also known as Mersane Warria, had been charged with the children’s murders but Queensland’s Mental Health Court ruled she should not stand trial.

Experts said before the killings she had never been treated for mental illness.

Several psychiatrists testified that it was likely that Thaiday’s mental state had deteriorated in the months beforehand.

Thaiday believed she was the “Chosen One” and became obsessed with cleansing to protect herself and her family from demons.

A “dove call” – either real or imagined – sent her over the edge.

Forensic psychiatrist Dr Jane Phillips told the court: “She heard the sound of a bird and believed from hearing that sound it was a message she must kill the children to save them.”

“This is quite a unique case and a horrendous case, the likes of which I’ve never seen before,” he said.

“This is schizophrenia at its very depth and its worst.”

The bodies were discovered by Thaiday’s adult son, Lewis Warria. He found his mother in front of the house with 35 self-inflicted stab wounds.

Justice Jean Dalton said there was a convincing body of evidence that Thaiday could not control or understand her actions.

“Ms Thaiday had a mental illness that deprived her of capacity at the time of the killing,” Justice Dalton said.