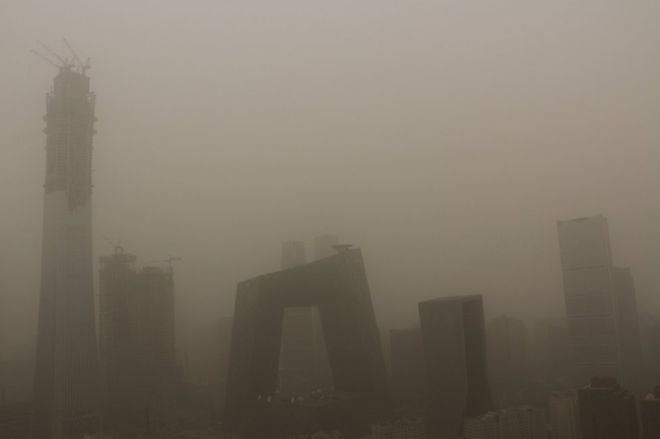 A dust storm is choking a large swathe of northern China including the capital, Beijing, in yet another air quality crisis to affect the country.

Authorities are advising residents to avoid outdoor activity and for children and elderly people to remain indoors.

The dust is blowing in from neighbouring Mongolia and China’s Inner Mongolia Autonomous Region.

Beijing’s environmental agency said that as of 11:00 local time (03:00 GMT), the PM2.5 reading – which measures pollution in the form of small breathable particles – was 500 micrograms per cubic metre.

The WHO says the maximum safe level should be 25 micrograms per cubic metre.

Authorities said Beijing would be affected until Thursday evening and visibility would be noticeably low throughout the day. Dozens of flights have been delayed or cancelled.

State media quoted city officials as saying that the dust storm began moving towards Beijing in the late afternoon on Wednesday, and enveloped the city overnight.

The dust storm has also affected, to varying degrees, a vast swathe of northern China stretching from the far west province of Xinjiang to eastern Heilongjiang, with Inner Mongolia experiencing particularly bad conditions.

Chinese people have, as usual, not hesitated to take to social media to vent their frustration.

Others made comparisons to the capital’s infamous smog problem.

“I’ve got used to smog, time to try something new. If I have to choose one to live in, between sandstorm and smog, I prefer the former,” said another Weibo commenter.

China has seen particularly intense air pollution in recent years, especially in winter as many of its northern cities still largely rely on burning coal for heating.

But it is also increasingly affected by dust storms, as its cities expand towards nearby deserts which in turn have been spreading due to climate change.

Authorities have been attempting to halt this progress by planting more trees, besides other measures to cut pollution such as reforming the coal industry and shutting factories.

Beijing issued its first red alert, the highest level in air pollution alerts, in 2015, and has done so a few more times since.