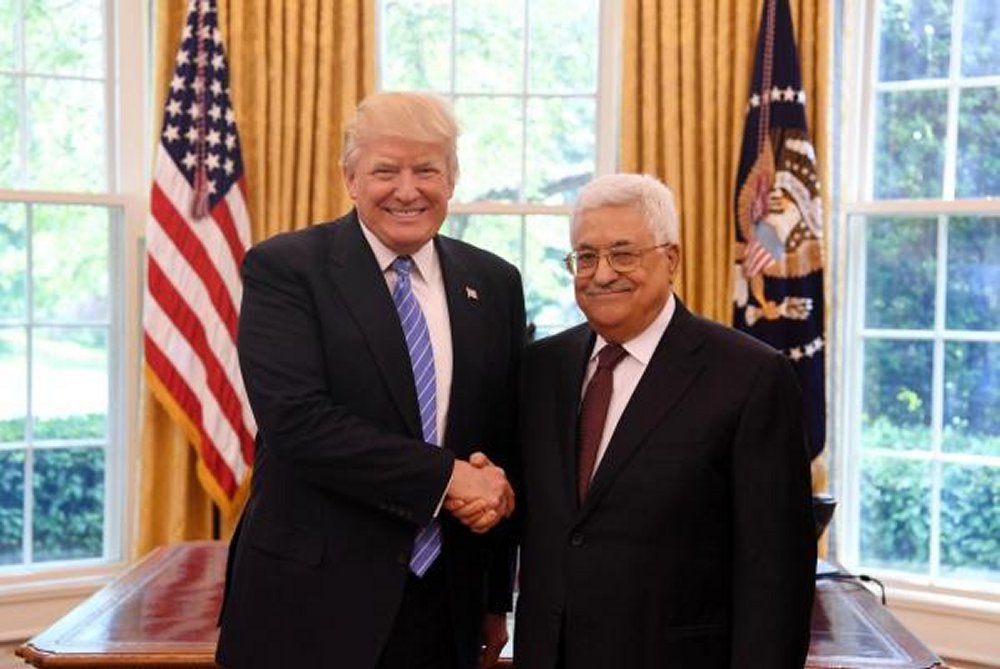 Trump, a staunch supporter of Israel, acknowledged the difficulties in resolving differences between the Jewish state and Muslim Palestinian authorities that date back to the mid-20th century, and which have resulted in hundreds of thousands of deaths.

“I’m committed to working with Israel and the Palestinians to reach an agreement, but any agreement cannot be imposed by the United States or any other nation,” Trump said at a joint news conference with Abbas, noting that a solution will only emerge if both parties unify behind an acceptable answer.

“The Palestinians and Israelis must work together to reach an agreement that allows both peoples to live, worship and thrive and prosper in peace. And I will do whatever is necessary to facilitate the agreement, to mediate, to arbitrate anything they’d like to do, but I would be a mediator or an arbitrator or a facilitator.”

Each side in the bloody, generations-long conflict has a shifting agenda. Abbas’ Palestinian National Authority — which succeeded the Palestinian Liberation Organization as the chief Palestinian leadership organization in 1994 — controls the West Bank, where Israel has for decades challenged its presence there by building Jewish settlements. Gaza, west of Israel, is largely run by the militant Hamas group — which has repeatedly called for Israel’s destruction, but more recently has expressed a willingness to accept a Palestinian state based on 1967 borders — before Israel seized much of the area following the Six Day War.

“We will get this done,” Trump said of the peace process.

Each side in the conflict faces its own internal divisions. At 82, Abbas’ influence over his organization is fading but on Wednesday he presented Trump with the clearest picture of the Palestinian view.

“Our strategic choice is to bring about peace based on the vision of the two-state [plan] — a Palestinian state, with its capital in East Jerusalem, that lives in peace and stability with the state of Israel — based on the borders of 1967,” Abbas said.

Trump has said he can live with either a one- or two-state resolution.

“I want to support you in being the Palestinian leader who signs his name to the final and most important peace agreement,” Trump said. “I am committed to working with Israel and the Palestinians.”

During his presidential campaign and since his inauguration, Trump has publicly offered support for Israel — but has also moderated some of his positions as he seeks cooperation from Arab leaders in fighting terrorism.

GOP senators are asking him to take a firm stance against payments made by Abbas’ organization to families of dead or jailed Palestinians who commit violence against Israelis or Americans.

They have introduced legislation to cut U.S. aid to the PNA if it continues. The Palestinian Authority spends about $315 million every year to aid families of suicide bombers and others who commit violence against Israelis, Sander Gerber of the Jerusalem Center for Public Affairs said.

“The payment of money to terrorists by a sliding scale — the more you kill the more you get — that’s the opposite of peace,” Israeli Prime Minister Benjamin Netanyahu said Tuesday. “It sends exactly the wrong message to young Palestinians. We want them to move toward peace.”

“Peace also means defeating [the Islamic State] and other terrorist groups,” Trump said Wednesday. “These groups are a threat to all people who cherish human life.”

Hamas leader Khaled Meshaal told CNN on Tuesday that Trump appears to be in a rare position to find a Middle East solution.

“This is a historic opportunity to pressure Israel to find an equitable solution for the Palestinian people, and it will be to the credit of the civilized world and the American administration to stop the darkness that we have been suffering from for many years,” Meshaal said.

Trump also praised Abbas for keeping up security coordination between the 23-year-old PNA and Israel.

“They get along unbelievably well,” Trump said. “At [prior] meetings, I was actually very impressed and somewhat surprised at how well they get along. They work together beautifully.

“But there can be no lasting peace unless the Palestinian leaders speak in a unified voice against incitement to violate and violence and hate. There is such hatred, but hopefully there won’t be such hatred for very long.”

New front to retake Mosul from IS