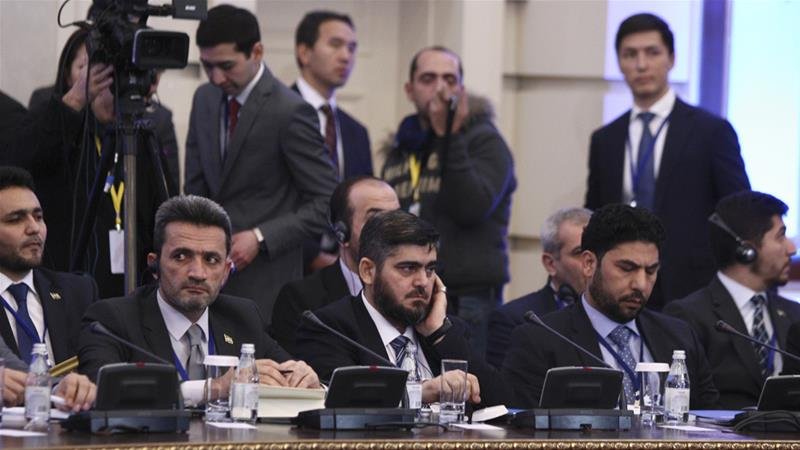 Syrian rebels have suspended their participation in the latest round of talks in Kazakhstan in protest against ongoing air raids in the war-torn country.

Syrian rebel and government delegations were discussing a Russian plan for “de-escalation zones” on Wednesday when the opposition walked out, citing the bombardment of rebel-held areas.

“The opposition delegation, that is the military delegation, has announced they are ‘suspending’ their participation in these talks,” Al Jazeera’s Jamal Elshayyal, reporting from the capital, Astana, said.

“They aren’t fully withdrawing participation, they’ve walked out of the meetings but they haven’t left – at least not yet,” he said.

A source close to the opposition provided the AFP news agency with an Arabic-language version of a proposal drafted by Russia, which an opposition official confirmed was being discussed on Wednesday.

It calls for the creation of “de-escalation zones” in rebel-held territory in the northwestern province of Idlib, in parts of Homs province in the centre, in the south and in the opposition enclave of Eastern Ghouta near Damascus.

The aim is to “put an immediate end to the violence” and “provide the conditions for the safe, voluntary return of refugees”.

The designated zones would also see the immediate delivery of relief supplies and medical assistance.

Trump and Abbas to discuss peace efforts at first talks