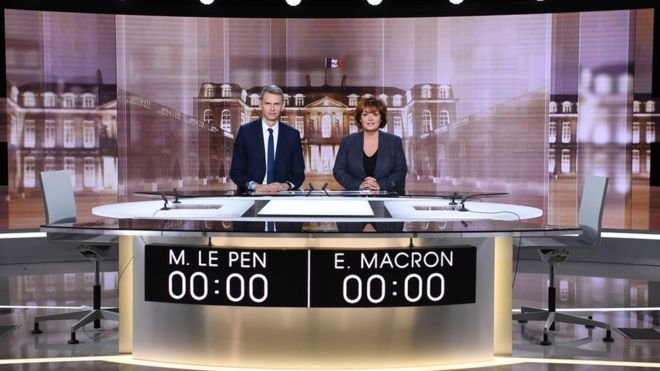 The two contenders for the French presidency go head to head on Wednesday in a TV debate seen as the climax of a long and bitter campaign.

The aim for centrist Emmanuel Macron and his far-right rival Marine Le Pen is to win the votes of large numbers of undecided or reluctant voters.

While Mr Macron is well ahead in the polls, his lead has narrowed and an estimated 18% of voters are undecided.

For the first time, neither candidate is from a mainstream French party.

Although Marine Le Pen’s father qualified in 2002 for the run-off as head of her party, the National Front (FN), his rival and eventual winner, Jacques Chirac, refused to take part in a debate because of the FN leader’s extremist views.

Both candidates have limited their campaigning in recent days in preparation for the debate, set for 21:00 (19:00 GMT) on Wednesday and due to last two hours 20 minutes.

There have been TV debates ahead of the first round but so far the two main candidates have not sparred face to face. And this is being billed as the moment of truth, on the two biggest TV channels in front of some 20 million French viewers.

All the big campaign themes will be tackled, from France’s 10% unemployment rate and the economy to security, health policy and the European Union.

For Marine Le Pen it is her big chance to land some blows and make up ground by exposing her 39-year-old rival’s relative inexperience.

Emmanuel Macron as favourite arguably has most to lose.

How will it work?

This is not like the US presidential debate where the candidates stand behind lecterns. This is a direct confrontation.

The two candidates will sit at a big desk, Marine Le Pen on the left, Emmanuel Macron on the right. The presidential debate is a tried and tested event in France, going back to 1974.

The two moderators, Nathalie Saint-Cricq and Christophe Jakubyszyn are heavyweight political journalists, but not the big TV presenters France is used to. That is because the candidates objected to the initial choices.

And don’t expect a 1960-style sweaty Richard Nixon moment. The temperature will be regulated at 19C to keep the candidates cool.

Match of the Day?

The debate is must-see TV for French voters but there could be a battle over the remote.

AS Monaco go head to head against Juventus 15 minutes before the debate starts in the semi-final of the Champions League, in a match broadcast on pay TV.

What to look out for

Marine Le Pen’s campaign is based on a patriotic “Choose France” slogan. According to her, she is the real thing, and her rival is an impostor backed up by the old guard of French politics.

Her supporters leapt on a rumour on Tuesday that Mr Macron was threatening to walk out of the debate if she started using him as a “punching-ball”. “If Mr Macron doesn’t feel comfortable he can always ask [President] François Hollande to come and hold his hand, I won’t stand in his way,” she tweeted.

But to convince voters wary of a far-right leader she may project a softer image too, while her opponent will need to show a firm streak.

Emmanuel Macron’s aim is to seek the moral high ground by showing that he has authentic policies while his rival’s ideas are simplistic and dangerous for France.

“I want to go head-to-head, to get to the bottom of the issues, to show that these are false solutions,” he said on Tuesday.

Can the debate make a difference?

The head to head debates have rarely changed the course of an election, simply because they involved the two main parties of the centre left and centre right, and the polls were often clear who was ahead.

But in one year in particular, in the first debate in 1974, one withering put-down by Valéry Giscard d’Estaing was seen as a decisive moment in his victory.

Socialist François Mitterrand had won the first round and attempted to land a blow on his rival. He accused Giscard d’Estaing of supporting a small elite while millions of French struggled. It was a question of intelligence and a matter of the heart, he said.

“You do not have, Mr Mitterand, a monopoly on the heart,” he responded, in a sentence that he said brought him the 400,000 votes he needed to turn the course of the election.