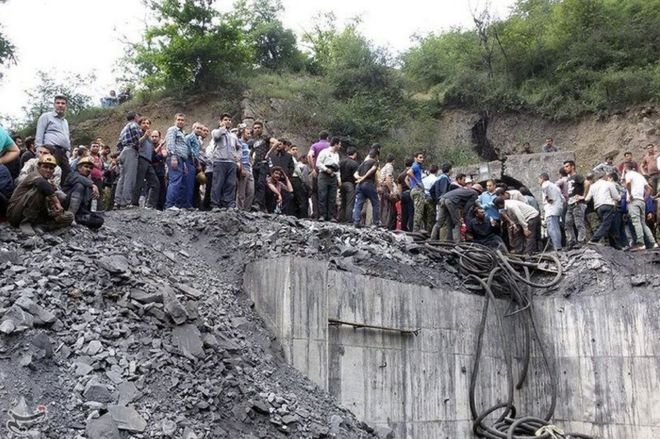 More than 50 miners are trapped after an explosion in a coal mine in northern Iran, state media reports say.

Two people are reported to have been killed and 25 others wounded by the blast at the Zemestan-Yurt mine, near Azadshahr in Golestan province.

One emergency services spokesman said that 16 people had managed to escape.

There are some reports that the incident was caused by a gas explosion, possibly as someone was attempting to start a lorry engine.

Pirhossein Koulivand, the head of Iran’s emergency services, told local news agencies that the number of trapped miners might be much higher, with 40 trapped in one section, and a similar number in another.

The rescue operation has reportedly been hampered by concerns about gas in the tunnels.

Hamidreza Montazeri, deputy head of the provincial emergency services, told PressTV that 25 people involved in the rescue had been taken for treatment after inhaling gas.

State media reported that the mine employed some 500 workers and that the explosion – which took place at about 12:45 local time (09:45 GMT) – happened during a change of shift.

Iran, which extracted 1.68 million tonnes of coal in 2016, mostly uses the coal it extracts on domestic steel production, rather than exporting it.

Trump and Abbas to discuss peace efforts at first talks

IS kills many in attack on Syrian camp