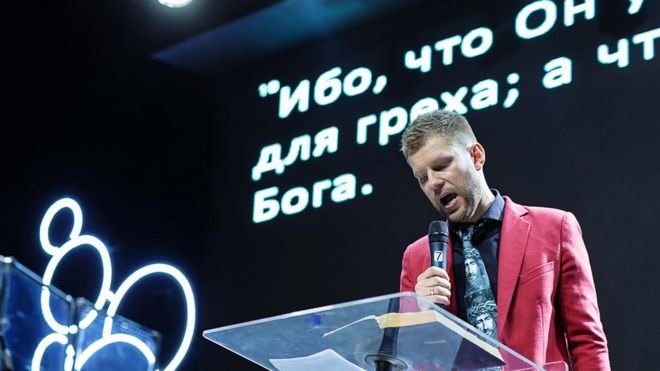 Controversial “treatments” by psychotherapists and preachers are being offered to gay people in Russia.

BBC Russian heard accounts of so-called cures, after it emerged that gay men were being persecuted in Chechnya, a mainly Muslim republic in southern Russia.

On Tuesday German Chancellor Angela Merkel said she had asked President Vladimir Putin to “use his influence to protect the rights of minorities”, referring to the reports from Chechnya.

Homosexuality is not officially considered a mental disorder in Russia. But homophobia is common – not only in Chechnya.

Russia removed homosexuality from its list of recognised psychiatric conditions in 1999 – after the US had done so in 1973 and the World Health Organization in 1992.

Globally, scientists do not recognise any “treatment” of homosexuality as effective or required.

Psychotherapist Yan Goland, from the city of Nizhny Novgorod, says he has “cured” 78 gay and eight transsexual people using a method developed in the Soviet Union by his teacher, Nikolai Ivanov.

He told the BBC that the “treatment” lasted between eight and 18 months, and longer for transsexuals.

“When a patient comes to me, I show them similar cases: how they were and how they are now. The patient is filled with hope that we can help, and understands they need to be treated,” he said.

In the first stage, he aims to “extinguish” the individual’s same-sex attraction. The hypnotherapy sessions can last up to eight hours. He also uses a mixture of psychoanalysis and identity therapy as a way of influencing a person’s dreams.

The second stage is meant to forge an attraction to the opposite sex. He prompts his male patients to sexually objectify the women around them.

“I tell them: ‘when you leave the session, walk down the street and take a look at all the young woman you see, take an interest in their figures and select the best.'”

Step three, Mr Goland says, involves sex with members of the opposite sex.

Yuri, 40, says he underwent the psychotherapist’s “treatment” in the early 1990s, wanting to “wake up and be on the right path”, but ended up with his sex drive in tatters.

“The result was, without doubt, negative if not damaging. It was catastrophic, if I’m honest.”

Mr Goland is now 80 and says he is still “treating” people.

A Russian web search on “how to cure homosexuality” brings up various websites offering online consultations with doctors.

The Nikitenko brothers describe themselves as “psycho-hypnologists” and offer a two-month course of audio-hypnosis. One session costs 5,000 roubles $88.

“When someone watches pornography and has gay sex, they forge a new neural pathway in the brain. A guy from Vladivostok called me: he’s 18 and said he was worrying for nine hours a day about becoming gay.”

Their hypnotherapy aims to de-stress the patient and teach them the “right ways to behave and react”.

The brothers boast they have already “treated” seven gay people who wanted to be straight and say there is “no chance of them relapsing”.

But there are doctors in Russia with views closer to those of Western specialists and scientists worldwide.

“You normally become aware of your sexual orientation between 11 and 13 years of age… There are several different orientations and homosexuality is one of the normal variants,” says psychologist Pavel Sobolevsky, who works with LGBT patients.

“You can’t change your sexual orientation,” he told the BBC – and that is what he tells clients who approach him over their sexuality.

Attempts to change your sexual orientation through psychotherapy can be damaging, he warned.

Some refused to go into details, saying they would only divulge them to religious media.

But Pastor Yevgeny Peresvetov did speak. He heads the Protestant organisation “Vosstanovleniye” (meaning “rehabilitation” or “resurrection”). It promises to help gay people “reject” their sexuality.

The organisation’s YouTube channel has accounts of two men who have “liberated themselves from sin” by “ridding themselves of homosexuality”.

The pastor, wearing a smart suit and a Jesus portrait on his tie, leads Sunday services in a Moscow club.

He sees homosexuality as an addiction – like a drug – and symptomatic of a “spiritual hunger”.

“Either the individual’s father wasn’t present, or was violent, or was only there on the periphery. Homosexuals find freedom when they find God as their father.”

Some Russian families turn to religious institutions to “cure” children who have come out.

Maria, 27, was taken to church against her will by her family to “treat” her homosexuality when she was only 13. She had holy water poured over her while others read out prayers.

“I couldn’t hear anything; I was bawling my eyes out. They kept on reading out prayers and forced me to go to church, where I was told that my attraction to other women came from Satan,” she told the BBC.

“They covered me in holy water and forced me to drink it. Sometimes they hit me with rods. I feel like they broke my mind.”

“The first doctor said: ‘You just got carried away: look at you, you’re a real man! You want to have surgery? Can’t you just live like everyone else?'”

A second doctor told Yevgenia she was probably a gay man and an attention-seeker.

“He said I just had to resign myself to being a man,” Yevgenia told the BBC.

California restaurant owner crafts pizza made entirely out of cheese