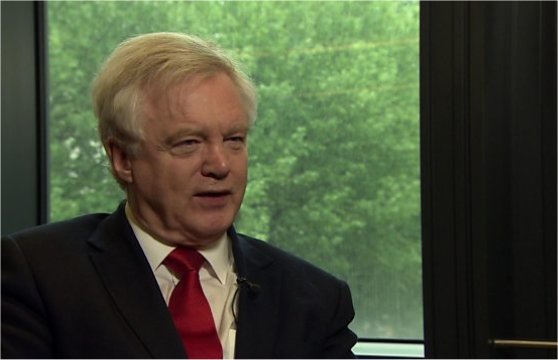 The UK won’t pay a 100bn-euro “divorce bill” to leave the EU, Brexit Secretary David Davis has said, as the two sides clashed over the issue.

He told ITV’s Good Morning Britain the UK would pay what was legally due, in line with its rights and obligations, but “not just what the EU wants”.

EU chief negotiator Michel Barnier said there was no desire to punish the UK but “its accounts must be settled”.

While he wanted a “cordial” Brexit, he warned the “clock was ticking” now.

Publishing his Brexit mandate, Mr Barnier said the EU would “put all its efforts” into reaching a deal but said negotiations must start as soon as possible after “ten months of uncertainty” and suggested the outcome of June’s general election would not change anything.

While approaching the process in a “cool-headed and solution-oriented” manner, he said it was an illusion to think it would be concluded “quickly and painlessly” or that there would be “no material impact” on lives.

An EU source has told the BBC that officials in Brussels will not enter into a discussion about potential figures for a final bill, likely to be one of the hardest-fought and most sensitive areas of the Brexit process.

On Wednesday, the Financial Times claimed the likely bill had risen sharply from 60bn to 100bn euros, basing its calculations on new data from across Europe.

Mr Barnier said there was no agreed figure but the UK and EU had entered into “mutual commitments” which must be honoured. “There is no Brexit bill. The final settlement is all about settling the accounts.”

Mr Davis said the negotiations had not started in earnest but he indicated the UK would set down a marker when it came to talks over the divorce settlement.

Various figures ranging from 50bn to 100bn euros had been knocking around, he said, but he had “not seen” any official numbers. Asked directly whether a figure of 100bn euros – was acceptable, he replied: “We will not be paying €100bn.”

He added: “We will do it properly. We will take our responsibilities seriously. What we’ve got to do is discuss in detail what the rights and obligations are.

He subsequently told the BBC that the 100bn euro figure should be viewed “with a pinch of salt” and the negotiations would not “end up there”, adding that it was up to the two sides to agree and he did not want the European Court of Justice to become involved.

Many Conservative MPs argue the UK does not owe the EU anything given the size of the contributions it has made over the past 40 years. A recent report by a House of Lords committee argued the UK was not legally obliged to pay a penny although to do this would threaten any chance of a post-Brexit trade deal.

Former Chancellor Lord Lawson, a strong supporter of Brexit, said the UK’s withdrawal would have a big impact on the bloc’s finances and that was why the EU was “so exercised” about the issue.

He told BBC Radio 4’s World at One that the current political climate – with elections in the UK, France and Germany – was not conducive to a “rational” negotiation but once these were all over, the UK should make a “very good” offer to the EU on a range of issues.

If this was rejected, he suggested the UK should effectively suspend talks and “wait patiently” until the time came to leave.

Some sort of financial resolution is seen by the EU as a precondition for opening talks on a trade deal.

There are reports in Brussels that countries like France and Poland could ask the UK to contribute to farm subsidies while the EU may also be planning to refuse to allow the UK a share of the EU’s assets including buildings and bank deposits.

Zsolt Darvas, a senior fellow at the Bruegel think tank, said a range of factors would have to be taken into account – including the UK’s rebate on budget payments and its share of EU borrowing – but he believed a credible figure would be somewhere between 25bn and 65bn euros.

There have been growing tensions between the UK and EU since a dinner in Downing Street last week, in which European Commission President Jean-Claude Juncker is reported to have told Theresa May that Brexit could not be a success.

Mr Davis, who was one of ten people present at the dinner, said accounts of the meeting were “gossip and spin” and while there were some differences in key areas, the atmosphere had been “constructive” rather than hostile.

While the process was currently in a “rough and tumble” phase of manoeuvring, he believed a “generous settlement” could be reached over the status of EU nationals living in the UK and Britons living on the continent which guaranteed “pretty much exactly” the same rights they enjoy at the moment.

Labour leader Jeremy Corbyn said the 100bn euro figure was the “opening gambit of negotiations” but that commitments that have been made by the UK government must be honoured.

For the Lib Dems, Tim Farron said no divorce bill had ever been mentioned during last year’s referendum and it strengthened his party’s call for a further vote on the terms of exit.

But UKIP leader Paul Nuttall said talk of a 100bn euro figure was “ridiculous” and the UK “should not be paying anything at all”.

Le Pen and Macron to face off in French election debate