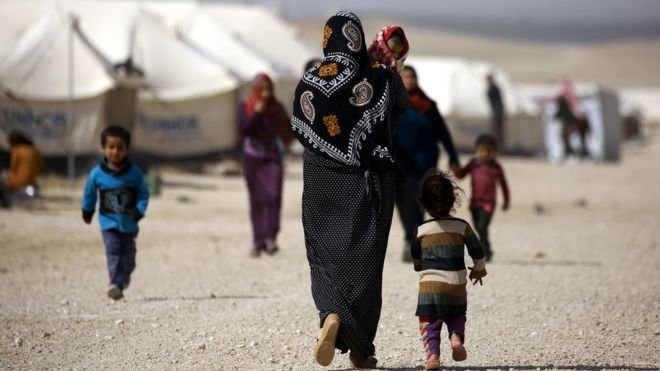 More than 30 civilians and Kurdish-led fighters have been killed in an attack by Islamic State militants near Syria’s north-eastern border with Iraq.

They targeted a makeshift camp for displaced Syrians and Iraqi refugees at Rajm al-Salibi, near the town of Shaddadi in Hassakeh province.

The militants also also clashed with members of the Syrian Democratic Forces (SDF) stationed at a nearby checkpoint.

The US-backed alliance is spearheading the battle against IS in eastern Syria.

Its Kurdish and Arab fighters are close to taking control of the strategically important Euphrates River Valley town of Tabqa and will soon launch an offensive to retake the de facto IS capital of Raqqa.

At least five IS suicide bombers blew themselves up outside and inside the camp at Rajm al-Salibi, south-east of the town of Shaddadi, at dawn on Tuesday, the Syrian Observatory, a UK-based monitoring group, reports.

At least 32 people were killed by the bombings and subsequent clashes, among them 21 civilians, and 30 other people were wounded, it adds.

According to Syria’s official Sana news agency, more than 30 civilians were killed and 34 wounded. It did not say whether there had been any suicide bombings.

The Kurdish Red Crescent put the civilian death toll at 22.

SDF fighters took wounded civilians to hospitals in the city of Hassakeh. Several were admitted to intensive care due to the severity of their injuries, according to medical sources cited by Sana.

The militants also abducted dozens of civilians during the attack, an Iraqi army source told the BBC.

It was not possible to verify the report. However, a similar allegation was made by the head of the Iraqi parliament’s human rights committee in an interview with Beirut-based al-Mayadeen TV and Sana cited some of those injured as saying they had lost contact with dozens of their relatives.

They included Syrians from Raqqa and Deir al-Zour provinces, as well as Iraqis who had fled the second city of Mosul, Sana reports.

Iran coal mine explosion: More than 50 trapped in Golestan