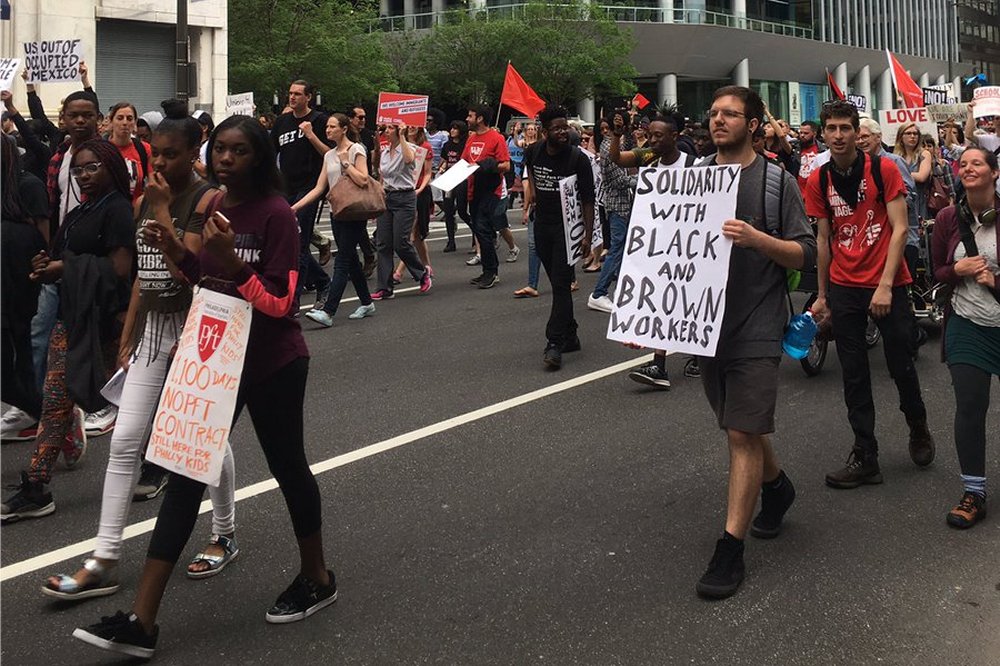 Demonstrators planned to rally across the United States against President Donald Trump’s policies in May Day protests Monday.

Events were scheduled in the biggest cities across the country — New York, Chicago, Los Angeles and Philadelphia.

Worldwide, May 1 is known as International Workers’ Day to highlight workers’ rights.

The marches in the United States will involve other issues, including immigrants’ rights, LGBT awareness and police misconduct.

“There’s a real galvanization of all the groups this year,” Fernanda Durand of Casa in Action said to USA Today. “Our presence in this country is being questioned by Donald Trump. We are tired of being demonized and scapegoated. We’ve had enough.”

His group plans to draw 10,000 people in Washington, D.C., on immigrants’ rights. The march will proceed near the White House and culminate with speeches from immigrants and elected officials. More than 200 immigrant-owned businesses will close in Washington.

His rally is part of the Rise Up movement, which has organized 259 events in more than 200 cities.

In Philadelphia, a group called Philly We Rise marched throughout downtown in support of “alternatives to the Trump agenda,” according to its website.

In Oakland, Calif., dockworkers plan to close the city’s waterfront, and demonstrations and marches are set to be held outside federal immigration offices, in front of the jail and along Bay Area Rapid Transit routes.

Since Trump took office on Jan. 20, marches have included a variety of causes, starting with the Women’s March on Washington and other cities to climate change awareness on Saturday.

“There’s really a sense that we’re in this together,” said Erick Sanchez, another Washington-based organizer. “That an attack on one is an attack on all.”

“On Loyalty Day, we recognize and reaffirm our allegiance to the principles upon which our nation is built,” Trump wrote in his proclamation. “We pledge our dedication to the United States of America and honor its unique heritage, reminding ourselves that we are one nation, under God, made possible by those who have sacrificed to defend our liberty. We honor our republic and acknowledge the great responsibility that self-governance demands of each of us.”

He directed government buildings to display the U.S. flag and schools to observe the holiday with ceremonies.

Originally, May Day was a pagan celebration from 2,000 years ago that celebrated the return of spring.

On May 1, 1886, it became international worker’s rights day for a strike in Chicago seeking the 8-hour workday.

In 1891, the Second International, a worldwide socialist and communist parties organization, marked the fifth anniversary of the march in Chicago.

In 2006, roughly 1 million people, including nearly half a million in Chicago, protested federal legislation to make living in the United States without legal permission a felony.