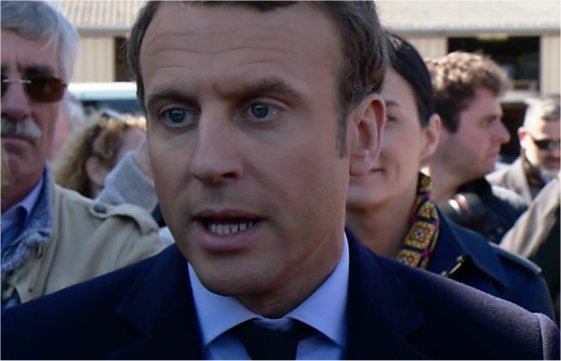 The front-runner in the French presidential election has told the BBC that the EU must reform or face the prospect of “Frexit”.

Pro-EU centrist Emmanuel Macron made the comments as he and his far-right rival Marine Le Pen held rallies in the last week of campaigning.

French voters go to the polls on Sunday to decide between the two.

At a rally in a suburb of Paris, Ms Le Pen has meanwhile accused Mr Macron of being merely more of the same.

Ms Le Pen has capitalised on anti-EU feeling, and has promised a referendum on France’s membership.

France is braced for mass May Day rallies. Five big unions have urged their members not to vote for Le Pen, though three have stopped short of backing Macron.

“I’m a pro-European, I defended constantly during this election the European idea and European policies because I believe it’s extremely important for French people and for the place of our country in globalisation,” Mr Macron, leader of the recently created En Marche! movement, told the BBC.

“But at the same time we have to face the situation, to listen to our people, and to listen to the fact that they are extremely angry today, impatient and the dysfunction of the EU is no more sustainable.

Mr Macron added that if he were to allow the EU to continue to function as it was would be a “betrayal”.

The 39-year-old is leading in the polls by 20 percentage points, and will try to win over more voters when he speaks in north-east Paris later.

Ms Le Pen, 48, has been holding her rally in the working-class Paris suburb of Villepinte.

Referring to Mr Macron’s period as a minister in President Hollande’s government, she accused him of being a “candidate of continuity… littered with the corpses of jobs transferred off-shore, the ruins of bust businesses, and the gaping holes of deficit and debt”.

Ms Le Pen has won support in rural and former industrial areas by promising to retake control of France’s borders from the EU and slash immigration.

Earlier, her estranged father – FN founder Jean-Marie Le Pen – attended a march from the statue of Joan of Arc, a long-time FN icon.

The 88-year-old was kicked out of the FN by his daughter two years ago for repeatedly calling the Holocaust a “detail of history” – remarks which were preventing Marine Le Pen from putting distance between the party and its past links with anti-Semitism.

Sunday was France’s national day of remembrance for the French Jews who were deported to Nazi Germany during the Second World War.

But the war remains a difficult area for Ms Le Pen. She suggested earlier this month France was not responsible for a 1942 wartime round-up of 13,000 Jews, who were sent from France to Nazi death camps.

Meanwhile, Jean-François Jalkh – the man she named as interim president of the FN while she campaigned – was forced to step down on Tuesday amid claims he had questioned the reality of Nazi gas chambers, which is a crime under French law. He denies wrongdoing.

Preliminary info: Up to 24 killed in massive landslide in Kyrgyzstan