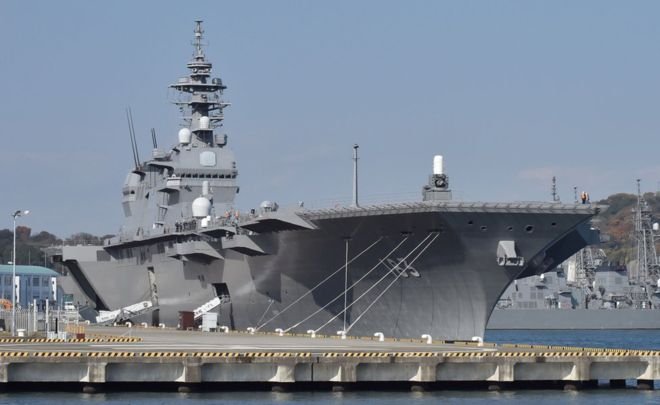 Japan has dispatched its biggest warship, in the first such operation since it passed controversial laws expanding the role of its military.

The helicopter carrier Izumo is escorting a US supply vessel within Japanese waters.

The US ship is heading to refuel the naval fleet in the region, including the Carl Vinson aircraft carrier group.

North Korea has threatened to sink the Carl Vinson and a US submarine, amid rising tensions in the region.

It also carried out a failed missile test on Sunday, despite repeated warnings from the US and others to stop its nuclear and missile activity.

The 249m-long Izumo can carry up to nine helicopters, and resembles US amphibious assault carriers, reported the Japan Times.

Kyodo news agency said it was leaving its base in Yokosuka, south of Tokyo, to join the US supply ship and accompany it to waters off Shikoku in western Japan.

Japan’s post-World War Two constitution bars its military from using force to resolve conflicts except in cases of self-defence.