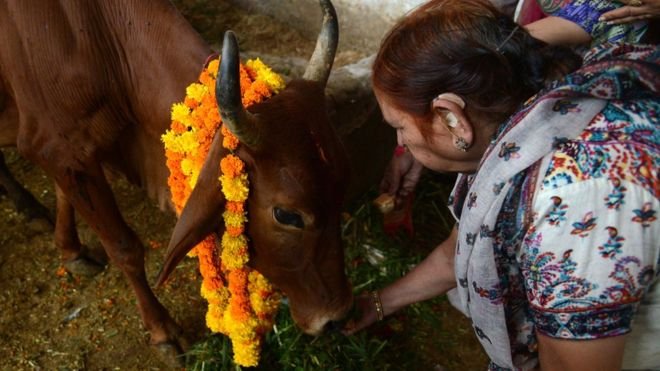 Police in India say two Muslim men have been lynched by a mob which accused them of trying to steal cows for slaughter.

The killings in the north-eastern state of Assam are the latest in a series of attacks blamed on religious tensions over the treatment of cows.

Hindus consider cows sacred and killing them is illegal in several states.

A Human Rights Watch report last week said at least 10 Muslims had been killed over the issue since May 2015.

The victims of Sunday’s attack in Assam’s Nagaon district have been identified as Abu Hanifa and Riyazuddin Ali, police said.

“They were chased and beaten with sticks by villagers who said the two men were trying to steal cows from their grazing field,” news agency AFP quoted senior police official Debaraj Upadhyay as saying.

“By the time we took them to the hospital at night they had succumbed to their injuries.”

A murder case has been registered and two people have been detained for questioning, police said.

The Human Rights Watch report says that since the Hindu-nationalist Bharatiya Janata Party formed India’s federal government in 2014, attacks against Muslims and Dalits (formerly known as untouchables) have risen over rumours that they sold, bought or killed cows for beef.

Those killed in the violent vigilante campaign against beef consumption in India include a 12-year-old boy.

Many states are now actively enforcing bans on cow slaughter and in March, the western state of Gujarat passed a law making the slaughter of cows punishable with life imprisonment.

In addition to government bans, vigilante groups who portray themselves as protectors of cows have also been active in several states.

Prime Minister Narendra Modi last year criticised the vigilantes, saying such people made him “angry”, but this has not stopped the attacks against cattle traders.