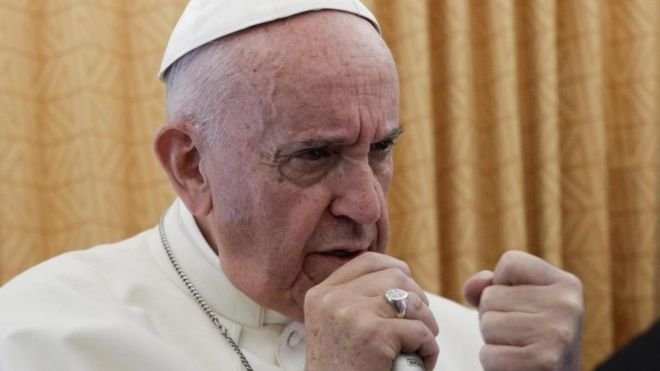 Pope Francis has called for international mediation to ease rising tensions between the US and North Korea over Pyongyang’s nuclear activity.

The pontiff suggested that Norway, for example, was “always ready to help”.

He warned the crisis risked sparking a devastating war in which “a good part of humanity” would be destroyed.

His comments came hours after North Korea test-fired another ballistic missile, which the US and South Korea say exploded shortly after take-off.

The missile was fired from a site in South Pyeongan province, north of Pyongyang, South Korea said.

US President Donald Trump accused Pyongyang of showing “disrespect” towards China and its president.

Speaking to reporters aboard his plane after a visit to Egypt, Pope Francis said: “There are so many facilitators in the world, there are mediators who offer themselves, such as Norway for example.”

He warned that the situation had become “too hot” and said the “path is the path of negotiations, of a diplomatic solution”.

The United Nations, he said, had become “too watered down”.

In 2003 six-party talks – involving the two Koreas, the US, China, Japan and Russia – were launched to address concerns over the North’s nuclear programme. But Pyongyang withdrew from the negotiations in 2009.

It is not known what kind of missile was unsuccessfully launched on Saturday. However, US officials told Reuters news agency that it was probably a medium-range missile known as a KN-17.

The land-based, anti-ship ballistic missile has already had two failures.

The US has threatened to use military force in North Korea if necessary.

In an interview with CBS on Saturday, Mr Trump said he would “not be happy” if North Korean leader Kim Jong-un went ahead with a further nuclear test.

Asked whether that would mean US military action, he said “I don’t know. I mean, we’ll see.”

Are the missile failures unusual?

North Korea has had two failed missile launches this month – but that does not mean they will always fail, an expert has said.

Jeffrey Lewis, a scholar at Middlebury Institute of International Studies at Monterey, told the BBC this was to be expected when testing a new missile as there was such a variety of things which could go wrong.

“Every time you have a new missile there are going to be growing pains,” he said. “There is nothing unusual if it is new missiles.

“It will fail until it doesn’t.

“In fact, the [American] rocket which put Alan Shepard [the first US man] in space was known as ‘Old Reliable’, but it failed nine out of 10 of its first tests.”

How else has tension risen?

Among other developments in recent weeks: