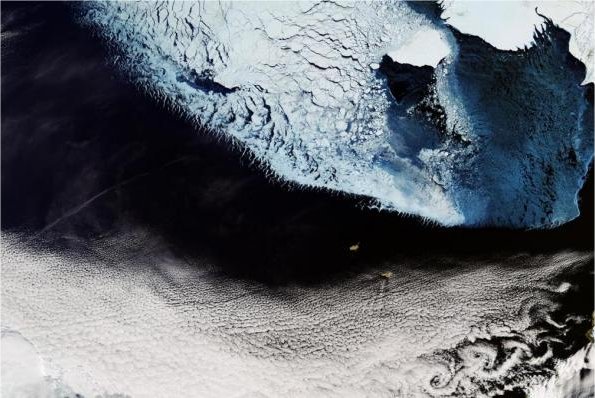 NASA’s Copernicus Sentinel-3A satellite snapped a stunning photo of the Bering Strait during a recent trip across the narrow strip of water separating Alaska and Siberia.

The image was captured on March 26 and shared online on April 28.

The Sentinel-3A is an Earth observation satellite launched as part of the Copernicus mission by the European Space Agency. The satellite was carried into orbit on January 16, 2016, and is dedicated to the study of oceanography.

In the bottom half of the image, clouds can be seen swirling across the strait. At the top of the image, sea ice extends southward. Algae grows on the sea ice’s underside. As the sea ice melts during the warm months ahead, algae blooms will feed on the melted ice, which is rich in nutrients.

Algae form the base of the marine ecosystem in the Bering Strait, feeding other small creatures, like krill, which in turn, provide energy to larger species.

Unimak Island can be seen on the righthand side of the image. The island’s volcanic peaks are responsible for the cloud’s unique shape. As the clouds pass across the volcano mounts, they become twisted into small, swirling eddies.

The Bering Strait was always filled with cold, oxygenated water. Several thousand years ago, a land bridge connected the continents. Recent research suggests an early human relative — perhaps Neanderthals — crossed the bridge to North America as many as 130,000 years ago.