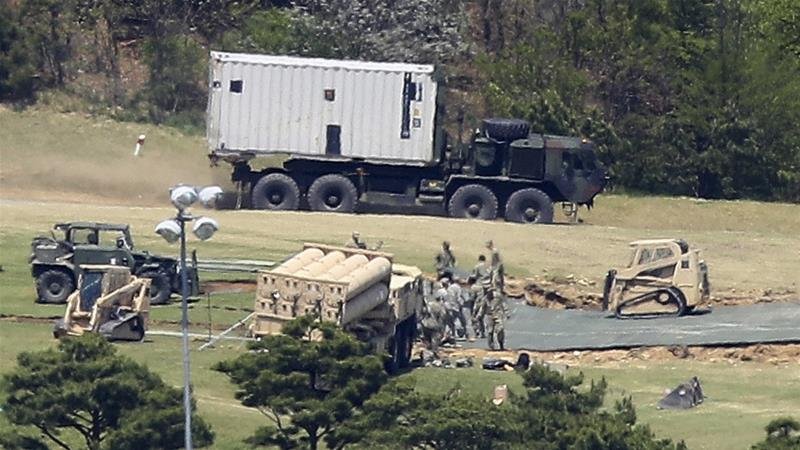 South Korea’s government has brushed aside US President Donald Trump’s suggestion that it should pay for a $1bn missile defence system the two allies are installing in South Korea to guard against threats from North Korea.

The first components of the Terminal High Altitude Area Defense (THAAD) system have already been delivered and set up at a former golf course in South Korea – infuriating China – at a time of heightened tensions over Pyongyang’s nuclear and missile programmes.

Top US officials have said THAAD will be operational “within days”.

“I informed South Korea it would be appropriate if they paid. It’s a billion-dollar system,” Trump said in an interview with the Reuters news agency.

“It’s phenomenal. It’s the most incredible equipment you’ve ever seen – shoots missiles right out of the sky,” said Trump. “And it protects them and I want to protect them. We’re going to protect them. But they should pay for that, and they understand that.”

The two countries have been in a security alliance since the 1950-53 Korean war, and more than 28,000 US troops are stationed in South Korea.

Seoul retorted that under the Status of Forces Agreement that governs the US military presence in the country, South Korea would provide the THAAD site and infrastructure while the US would pay to deploy and operate it.

“There is no change to this basic position,” South Korea’s defence ministry said in a statement.

The row comes with tensions high on the Korean peninsula following a series of missile launches by North Korea and warnings from the Trump administration that military action was an “option on the table”.

But earlier this week it said it would seek stronger sanctions against Pyongyang and held open the possibility of negotiations, with US Pacific Command chief Admiral Harry Harris saying it wanted to bring leader Kim Jong-un “to his senses, not to his knees”.

The White House also wants China to do more to rein in North Korea, but Beijing has been infuriated by the THAAD deployment which, it fears, weakens its own ballistic capabilities and upsets the regional security balance.

Social media commentators were derisive. “So he wants to start a war with North Korea and he wants South Korea to pay for it,” wrote one Twitter poster.

Al Jazeera’s Wayne Hay, reporting from Seoul, said that the THAAD system was controversial from the start but that Trump’s comments have “come out of the blue”.

“This is US equipment, it is being run by United States personnel, it is on South Korean land that has effectively been given to the United States,” said Hay. “So it is difficult to see how Donald Trump can get this one through.”

Hay said there had also been a negative response to Trump stating that he wants to renogiate or terminate a five-year-old free trade pact with South Korea because of the deep trade deficit with Seoul.

“Generally, the free trade agreement has worked well – trade has increased between the two countries when we’ve seen trade decreasing generally around the world,” said Hay.