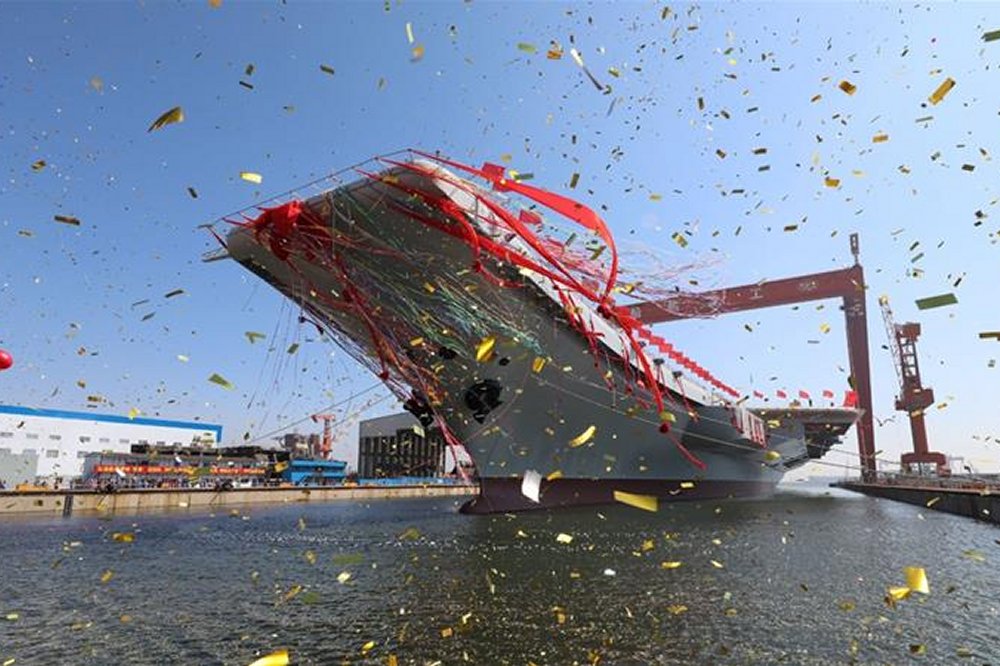 China has launched its first domestically made aircraft carrier, in a demonstration of the growing technical sophistication of its defence industries.

The 50,000-tonne carrier was towed from its dockyard on Wednesday morning after a ceremony in the northern port city of Dalian.

Development of the new carrier began in 2013 and construction commenced in late 2015. It is expected to be formally commissioned some time before 2020, after sea trials and the arrival of its full air complement.

Reports of the launch said a bottle of champagne was broken across the ship’s bow and other craft in the port sounded their horns in celebration.

Like the 60,000-tonne Liaoning aircraft carrier, which was purchased from the Ukraine, the new carrier is based on the Soviet Kuznetsov class design, with a ski jump-style deck for taking off and a conventional oil-fuelled steam turbine power plant.

The design limits the weight of payloads its planes can carry, its speed and the amount of time it can spend at sea compared with US nuclear-powered carriers.

The main hull of the new carrier has been completed and its power supply put into place. Next up are mooring tests and the debugging of its electronic systems, the defence ministry said.

China is believed to be planning to build at least two – and possibly as many as four – additional carriers, with one of them, the Type 002, reported to be already under construction at a shipyard outside Shanghai.

They are expected to be closer in size to the US Navy’s nuclear-powered 100,000-tonne Nimitz class ships, with flat flight decks and catapults to allow planes to launch with more bombs and fuel aboard.

China has offered little information about the roles it expects its carriers to play, although its planning appears to be evolving as it gains more experience.

The Liaoning was initially touted mainly as an experimental and training platform, but in December was declared to be combat-ready and has taken part in live-firing exercises in the South China Sea, where tensions have risen over China’s construction of man-made islands complete with airstrips and military structures.