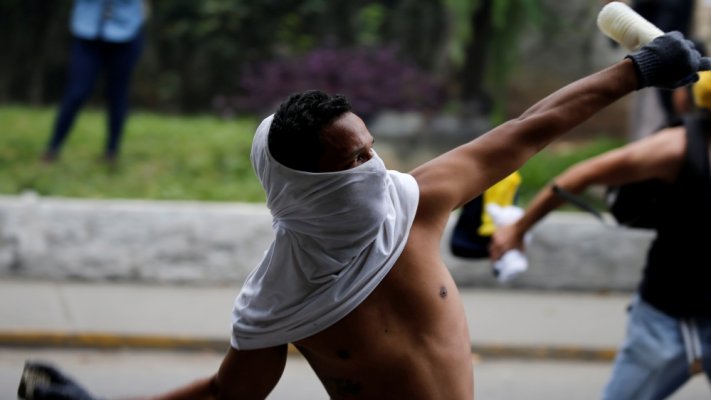 Two Venezuelan students and one police officer have died after being shot during what the opposition dubbed the “mother of all marches” against President Nicolas Maduro.

Clashes broke out on Wednesday in the Venezuelan capital, Caracas, where hundreds of thousands of people held rival protests amid rising tensions over the country’s political crisis.

Maduro supporters held a counter-demonstration at the urging of the president.

On the capital’s northwest side, a student was shot in the head by motorcycle-riding gunmen who also threw tear gas canisters into a crowd of protesters, witnesses told the AFP news agency.

The student, identified as Carlos Moreno, later died in a hospital. Witnesses and a family member said Moreno, 18, was on his way to play football and did not plan to take part in the demonstration when government supporters approached an opposition gathering and fired shots.

Later, in the opposition hotbed of San Cristobal, university student Paola Ramirez died after being shot by armed men on motorbikes encircling people leaving the protest, according to Mayor Patricia Gutierrez.

The public prosecutor’s office said it was investigating both cases.

Overnight, a National Guard sergeant was killed and a colonel wounded when their squad was attacked with gunfire while trying to control disturbances in a city near Caracas, the prosecutor’s office later said.

Waving the country’s red, yellow and blue flag and shouting “No more dictatorship” and “Maduro out”, tens of thousands of protesters converged from 26 different points spread across Caracas to attempt to march downtown to the Ombudsman’s office.

Later, A National Guard sergeant was killed by a sniper during “violent protests” in Miranda state and a colonel was injured, the human rights ombudsman Tarek Saab tweeted on Wednesday night.

Local journalist Cody Weddle said there is a “real worry” that the situation could escalate, with more conflict between the opposition and pro-government groups, known as colectivos, which the opposition accuses of operating as paramilitary groups.

Earlier in the week Maduro announced a plan to arm 500,000 civilian members of the National Guard, a move that was swiftly condemned by rights groups and the Organization for American States.

Weddle said that the opposition did not only stage protests in the east of Caracas, as it normally does, but also in typically pro-government western areas.

“The pro-government groups don’t believe the opposition should not be in these parts of the city, but the opposition say they have the right to protest wherever they please,” he said.

“Today there were millions of us,” he told a news conference. “Tomorrow even more of us have to come out.”

The latest developments followed a fortnight of violent protests, in which five more people have been killed, triggered by a Supreme Court decision in March to assume the powers of the opposition-led Congress.

That move was later reversed, but it energised Venezuela’s opposition, already angered by widespread food shortages and triple-digit inflation.

“I participate in these protests out of a sense of responsibility for being Venezuelan. I love this land that gave me education, work and well-being. We need to face a critical situation, we are in a country that is collapsing,” farmer Omar Leal told Al Jazeera.

The opposition is now pushing for Maduro’s removal and the release of scores of political prisoners.

“The aim of these protests is to generate a definitive change of government and institutions,” protester Eduard Grosse told Al Jazeera. “Although part of the population demands elections, the majority wants a radical change; we don’t want to wait and see the destruction of the country.”

Maduro, in turn, has urged his supporters to defend the socialist “revolution” launched by his predecessor Hugo Chavez in 1999.

On Wednesday, the day Venezuela celebrated its declaration of independence from Spain two centuries ago, he accused the opposition of fomenting violence and called for elections to “put conspirators and the interventionist right in their place”.

Socialist officials dismissed the opposition marches as efforts to destabilise the government, pointing to barricades of burning trash mounted by protesters and vandalism of public property.

“They’ve got the right to march but marching isn’t burning stuff, throwing rocks,” Jahil Marcano, a 48-year-old construction worker who had joined the pro-government rally, told Reuters. “They view us Chavistas with hatred.”

The president also signed orders on TV late on Tuesday activating the “green phase” military plans to defend Venezuela against what he describes as US-backed attempts to sow chaos and overthrow him.

He also said authorities had rounded up unnamed members of an underground cell of conspirators at Caracas hotels, including some armed people who were allegedly planning to stir up violence at the march.

The opposition rejected his comments as a desperate attempt to intimidate Venezuelans from exercising their constitutional right to protest.

Eleven Latin American countries issued a joint statement this week calling on authorities to set a timeframe for elections to “allow for a quick solution to the crisis that Venezuela is living through”.

At least 14 killed in Manizales landslide