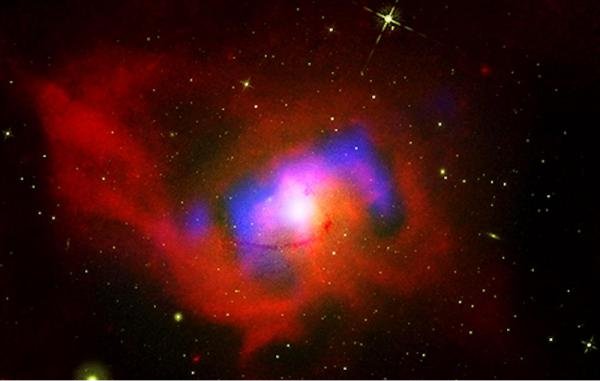 New data from the Chandra X-ray observatory has revealed the heart beat-like pulses of a faraway supermassive blackhole.

Black holes are mostly thought of as consumers of matter, but the mysterious objects also pump matter and energy back out into their environment. The pulses emanating from the supermassive black hole found at the center of NGC 4696, a large elliptical galaxy located 145 million light-years away, have far-reaching effects.

As the new survey revealed, its pulsing jets release wave-like bursts of energy, which can ripple thousands of light-years across the surrounding galactic cluster, the Centaurus cluster. But evidence of the black hole’s bursts suggest the heart hosts an arrhythmic beat.

Chandra’s X-ray images revealed vast expanses of space cleared of gas and dust, signatures left behind by sound waves produced by echoes of past energy bursts. Analysis suggests the bursts, or heart beats, occur every 5 to 10 million years.

The variable ripples found in Centaurus cluster are similar to those seen in the Perseus cluster. Scientists estimate the sound waves echoing through NGC 4696 are extraordinarily low-frequency, 56 octaves lower than middle C.

In addition to aural signatures, the supermassive black hole also reveals behind a chemical trail. Its bursts push gas enriched with heavy elements from supernovae out the galactic center. The bursts also prevent gas from cooling and condensing, which explains why NGC 4696’s center is devoid of new stars.

Researchers published their survey of NGC 4696’s supermassive black hole in the journal Monthly Notices of the Royal Astronomical Society.

Large asteroid to pass by Earth