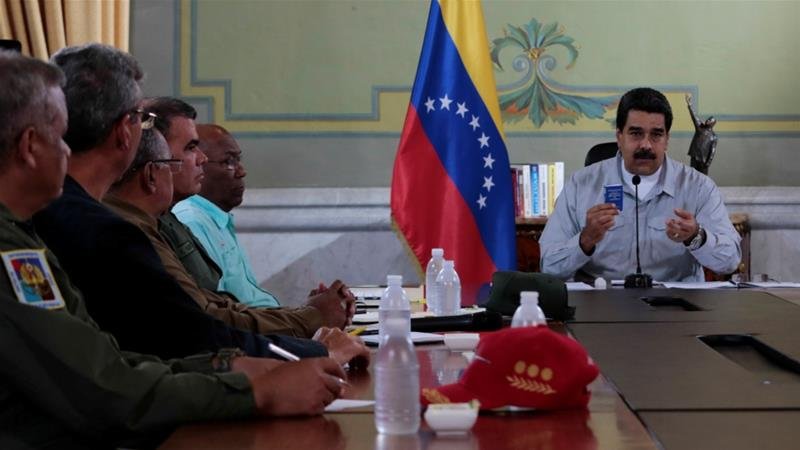 Venezuela’s defence minister has declared the army’s “unconditional loyalty” to President Nicolas Maduro, who ordered troops onto the streets ahead of a major protest by opponents trying to oust him.

Vladimir Padrino Lopez made the comment on Monday before thousands of pro-Maduro militia members at a rally outside the presidential palace, where the president thanked the army and civilian backers for their support.

Venezuela is bracing for what Maduro’s opponents vow will be the “mother of all protests” on Wednesday, after two weeks of violent demonstrations against moves by the leftist leader and his allies to tighten their grip on power.

The centre-right opposition has called on the military – a pillar of Maduro’s power – to turn on the president amid an economic and political crisis that has triggered severe food shortages, riots, and looting.

On Sunday night, Maduro ordered the military onto the streets to defend the leftist “Bolivarian Revolution” launched by his late mentor Hugo Chavez in 1999.

Maduro denounced his opponents as “traitors” and praised the military’s “unity and revolutionary commitment”.

Despite his announcement, there was no sign of soldiers on patrol on Monday in Caracas, though state TV showed images of army units marching in formation in the capital as the defence minister watched.

Venezuela has been rocked by unrest since March 30, when Maduro’s camp moved to consolidate its control with a Supreme Court decision taking over the power of the opposition-majority legislature.

The court partly backtracked after an international outcry, but tension only rose further when authorities slapped a political ban on opposition leader Henrique Capriles.

Five people have been killed and hundreds wounded in the ensuing protests as riot police clashed with demonstrators.

Venezuela is suffering through a crippling three-year recession and the world’s highest inflation rate.

The country has the world’s largest oil reserves, but the fall in global crude prices since 2014 has laid bare its overwhelming dependence on its chief export.

Lacking the oil dollars it once used to import nearly everything else, the country has been hit by severe shortages of food, medicine, and basic goods such as deodorant and toilet paper.

At least 14 killed in Manizales landslide