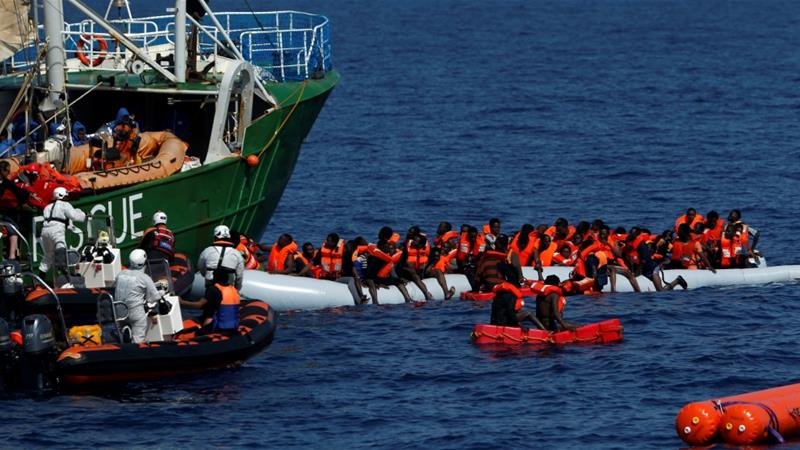 Nearly 8,300 asylum seekers were rescued from unseaworthy smugglers’ boats in the Mediterranean over the Easter weekend, according to NGOs and rescue workers.

More than 1,400 of the rescued were saved by European border and coast guard agency Frontex, which said it was involved in 13 search-and-rescue operations over the past three days.

Those saved were transferred to ships sailing to southern Italy.

A UN refugee agency spokeswoman, Carlotta Sami, tweeted on Monday that “rescuers worked incessantly” over Friday, Saturday and Sunday to save those people.

On Sunday, the bodies of seven people, including a child, were found during the latest rescue operations off the coast of Libya, a Maltese NGO and the Italian coastguard said.

Since Saturday, the Malta-based Migrant Offshore Aid Station (MOAS) said it has been involved in the “unprecedented” rescue and assistance of nine boats containing as many as 1,800 people.

When its rescue vessel reached capacity, MOAS’ crew were left supervising more than 1,000 people on the remaining boats as they waited for assistance to arrive, the NGO said.

According to the International Organization of Migration, 666 people have been logged as dead or missing off the Libyan coast so far this year out of an estimated 27,000 who have tried to reach Italy from Libya.

Last year, the estimated death toll among migrants and refugees on the Mediterranean was at least 5,000 – a new annual record, according to UN agencies.

Deaths linked to Mediterranean crossings by refugees have spiked in 2016, as arrivals to Europe fell. In 2015, more than one million people crossed the sea – mostly from Turkey to Greece – with 3,771 deaths recorded.

Malta’s president, meanwhile, appealed for support from the international community on managing an ongoing refugee influx, amid reports of humanitarian organisations struggling to conduct rescue operations.

“I urgently appeal to all countries of Europe and the Mediterranean, and to all people of goodwill, to act in solidarity, supporting the humanitarian initiatives currently under way to save lives,” President Marie-Louise Coleiro Preca said.

Related Topics:EuropeMOASUN refugee agency
Up Next