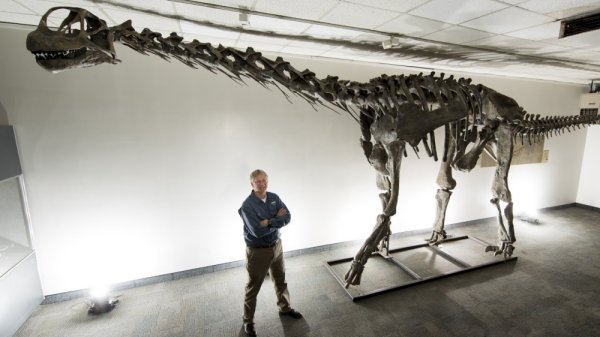 Researchers in Utah have discovered a new type of sauropod dinosaur. They named the plant-eating dino Moabosaurus utahensis after the place that yielded its bones, Utah’s Moab desert.

The 125-million-year-old skeleton was excavated from Dalton Wells Quarry, just outside Arches National Park. As researchers uncovered the dinosaur’s bones, it became clear the skeleton was distinct from known sauropods like Brontosaurus and Brachiosaurus.

Utah is rich in dinosaur fossils, but it looked much different 125 million years ago. There was no desert. Instead, lakes, streams and trees were abundant. But water wasn’t always plentiful.

Evidence suggests a severe drought killed many dinosaurs during the Cretaceous. The victims were trampled by the survivors — their bones crushed, carried downstream and then trampled again.

“We’re lucky to get anything out of this site,” lead researcher Brooks Britt, a professor of geology at Brigham Young University, said in a news release. “Most bones we find are fragmentary, so only a small percentage of them are usable. And that’s why it took so long to get this animal put together: we had to collect huge numbers of bones in order to get enough that were complete.”

Despite the challenges, Utah remains an ideal place to hunt for dino fossils.

“We always think of Moab in terms of tourism and outdoor activities, but a paleontologist thinks of Moab as a gold mine for dinosaur bones,” Britt said.

Researchers described the discovery of Moabosaurus utahensis in the University of Michigan’s Contributions from the Museum of Paleontology.