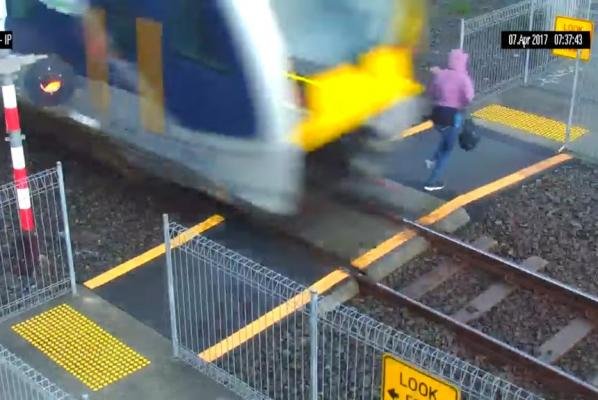 Transit officials in New Zealand shared video of an oblivious pedestrian’s near-miss with an electric train she failed to see coming.

The woman appears to notice the oncoming train at the last moment and speeds up her final step enough to avoid being struck by the train.

The video shows several other people walking across the tracks in front of the woman, ignoring flashing lights and warning bells.

“We’ve checked the footage of this morning’s incident and we can see the woman checked to her right before crossing but not to her left and that’s where the train was coming from,” Auckland Transport rail services manager Craig Inger told the New Zealand Herald. “It’s really important that you check both directions before crossing, a train can come from either direction.”

“You can’t be using your phone or have earphones on because you might miss the warning lights or bells,” he said.

Australian man swam away from seafood restaurant after $600 bill