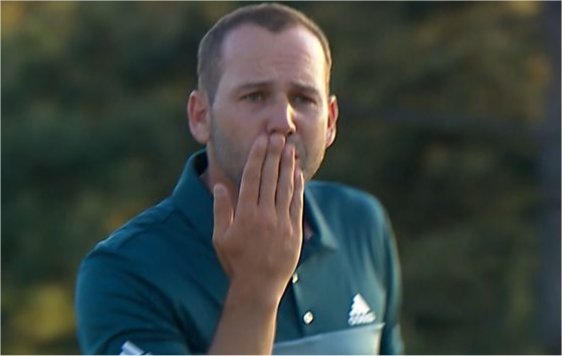 Spain’s Sergio Garcia ended his long wait for a first major title with a thrilling play-off win over England’s Justin Rose at the Masters.

Both players finished on nine under par after 72 holes, setting up a sudden-death play-off on the 18th.

Garcia, 37, holed a birdie putt for victory after his European Ryder Cup team-mate could only manage a bogey.

Charl Schwartzel was third on six under with England’s Paul Casey and Northern Ireland’s Rory McIlroy in the top 10.

Jordan Spieth, one of the pre-tournament favourites, and fellow American Rickie Fowler both capitulated on the final day.

Spieth, champion in 2015, signed for a three-over-par 75, while playing partner Fowler carded a 76 to finish tied in 11th on one under.

Garcia finally won one of golf’s four majors – the Masters, the Open Championship, the US Open and the US PGA Championship – at his 74th attempt after 22 previous top-10 finishes

He became the third Spaniard to win the Masters – after Seve Ballesteros and Jose Maria Olazabal – on what would have been the 60th birthday of Ballesteros, who died in 2011.

“To join Seve and Jose – my two idols – is amazing,” said Garcia.

How the play-off unfolded

Shot one: Rose teed off first on the 18th, pushing his drive right into the trees, only for his ball to bounce back towards play and reappear in the pine needles.

Garcia thumped his drive almost 300 yards down the fairway.

Shot two: Rose could only punch his way out of trouble onto the fairway, while Garcia landed his approach on the green, 12 feet from the hole.

Shot three: The Englishman responded by hitting his ball about 15 foot to the right of the hole – on a similar line to his putt in regulation play about 15 minutes earlier.

Rose missed his par putt to the left of the hole, leaving Garcia two shots for victory and the Spaniard rolled in his first attempt, with his ball circling the cup before dropping in.

Garcia dropped to his knees in celebration, and Rose instantly walked over to congratulate him as they shared a warm embrace on the green.

Garcia and Rose, who started playing against each other as teenagers and have become firm friends since, went out as Sunday’s final pairing after sharing the overnight lead on six under.

Rose has long craved a follow-up victory to his 2013 US Open win, in order to go down in history as a multiple major champion. For Garcia, the stakes were even higher.

Not only was the Spaniard aiming to win his first major, he was also trying to prove that he had the mental resilience to triumph.

What followed was an intense battle filled with drama and tension.

Garcia started strongly with birdies on the first and third, opening up a three-shot lead on Rose after he bogeyed the fifth.

But the Englishman replied with three straight birdies to rejoin his playing partner on eight under at the turn.

Garcia bogeyed the 10th to give Rose the outright lead, then appeared to lose his composure when he pulled his tee shot into the trees on the par-five 13th. He was forced to take a one-shot penalty because of an unplayable lie, but scrambled well to save par.

This sparked his revival, A remarkable eagle on the par-five 15th – his first in 452 holes at Augusta – followed by a Rose birdie, meant the pair were tied on nine under with three to play.

Garcia pushed a short birdie putt right on the par-three 16th after Rose had holed his to open a one-shot lead, only for the Englishman to bogey the 17th.

Both players missed birdie putts on the last, Garcia from four feet, setting up the first Masters play-off between two European players which Garcia nicked in fading light.

“It has been such a long time coming,” said the world number 11, who will rise into the top 10 on Monday.

“I knew I was playing well. I felt the calmest I ever felt in a major.”

Rose ‘disappointed’ at another close miss

While Garcia was being presented with the Green Jacket in the Augusta clubhouse, Rose was left rueing another near miss.

The reigning Olympic champion has not claimed a major since winning the 2013 US Open, but lifted himself into contention for a first Masters title with five birdies in the final seven holes on Saturday.

But Rose, who also finished second behind Spieth in 2015, had to settle for a fifth top-10 finish at Augusta National.

“It is disappointing to come so close,” said the world number 14. “I felt in control until the end.

“But I’m really happy for Sergio. I’d love to be wearing the Green Jacket but if it wasn’t me then I’m glad it is him.”

Israel closes its border with Egypt for Passover