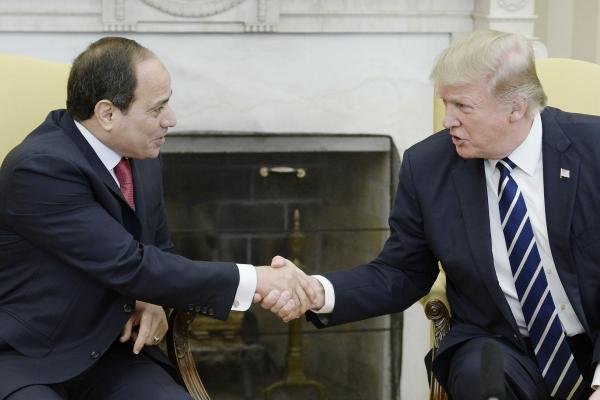 Sisi has not been invited to visit the White House since he took office in 2013 after a military-backed coup ousted former Egyptian President Mohammed Morsi. Though the Obama administration resumed military shipments and aid to Egypt in 2015, Obama expressed concerns about Sisi’s imprisonment of non-violent protesters and mass trials.

Under Trump, the leaders look to improve the relationship in which they will focus to fight Islamist militancy together.

“We agree on so many things. I just want to let everybody know in case there was any doubt that we are very much behind President al-Sisi,” Trump said in the Oval Office. “We will fight terrorism and other things. We’re going to be friends for a long, long period of time. We have a great bond with the people of Egypt … I look forward to a very long and strong relationship.”

Sisi — through a translator — said that he has “a deep appreciation and admiration of [Trump’s] unique personality” and that Trump has been “standing very strong … to counter this evil ideology.”

Trump and Sisi will hold a working lunch Monday afternoon in the State Dining Room of the White House after a bilateral meeting.

White House officials said Trump would approach the topic of human rights in a “private, more discreet way.” Human rights organizations, which say people who oppose Sisi are jailed and tortured, have criticized the Trump administration’s invitation to Sisi.

“Inviting Sisi for an official visit to Washington as tens of thousands of Egyptians rot in jail and when torture is again the order of the day is a strange way to build a stable strategic relationship,” a Human Rights Watch official said.

Ahead of the meeting, the White House said that “Egypt is one of the traditional pillars of stability in the Middle East and has been a reliable U.S. partner for decades.”

At least 58 killed in suspected chemical attack in Syria