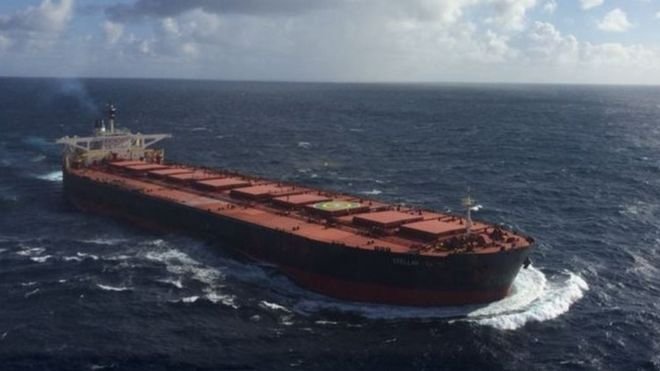 Rescuers say they have made little headway in finding survivors from a huge South Korean ship that sank in the South Atlantic.

Only two sailors have been rescued from the Stellar Daisy, which is believed to have broken apart on Friday.

“The more hours pass, the less the chances are of finding them,” Gaston Jaunsolo, the spokesman for the Uruguayan navy told Reuters news agency.

The ship, a Very Large Ore Carrier (VLOC), was operated by Polaris but was flagged to the Marshall Islands, and had 16 Filipinos and eight South Koreans on board.

It was transporting 260,000 tonnes of iron ore from Brazil to China.

It was last heard from on Friday when a crew member sent a text message to the South Korean owner of the ship, Polaris Shipping, saying the freighter was taking on water.

Mr Jaunsolo told reporters that the ship split in two and sank.

Two Filipino sailors were found on a life raft on Saturday.

The two rescued sailors had told Uruguayan authorities that at one point, their captain alerted the crew that “water was entering” and that the ship was breaking.

It is not yet known why the Stellar Daisy had run into difficulties. “It was not a complicated day for navigation,” Mr Jaunsolo told AFP news agency.

Brazilian and Argentine authorities, as well as merchant ships owned by Polaris Shipping, are taking part in the search.