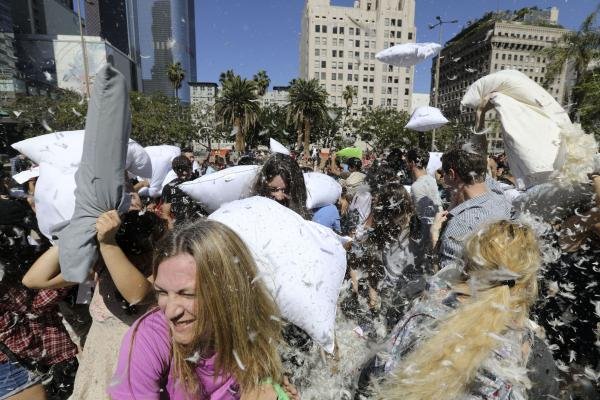 No one was knocked over by a feather in the marshmellow mayhem of International Pillow Fight Day, celebrated Saturday in more than 100 cities around the world.

And that was the purpose — delivering blows with a soft landing for good causes.

“We like pillow fights but not hurting people,” said TC Bavelas, who attended New York City’s Nordic-themed event with his girlfriend, Noelle Klocke. They dressed as Vikings.

Beat up gently, of course. Participants observed the rules of pillow fighting by swinging lightly.

They also helped organizers worldwide collect donations for the needy, including homeless shelters.

“It’s a lot of fun reliving my childhood,” Klocke said, “All about having fun and a good cause.”

Bull shark washed up on land after Australian cyclone