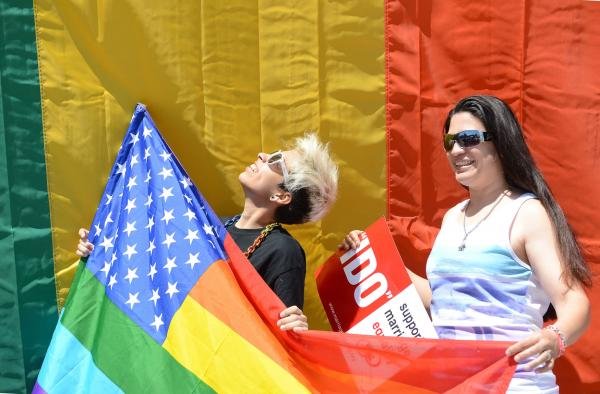 A San Francisco artist credited with creating the rainbow flag as a symbol for the LGBT community died at age 65 on Friday, friends said.

Gilbert Baker described himself as a “gay Betsy Ross” after he hand dyed and stitched together the first rainbow flag in 1978. It has since become an international symbol of gay pride. Baker was found dead in his New York City home on Friday.

The first flag had eight colors with each stripe carrying significance: “pink for sex, red for life, orange for healing, yellow for sun, green for nature, turquoise for magic, blue for peace and purple for spirit,” the New York Times reported. The flag has since changed to six colors, removing the pink color because pink fabric was too expensive and combining turquoise and blue into one color, royal blue.

“A flag translates into everything, from tacky souvenirs to the names of organizations and the way that flags function,” Baker said in 2008. “I knew instantly when I saw the reaction that it was going to be something. I didn’t know what or how or — but I knew.”

Baker recently finished creating a nine color flag containing the original colors plus lavender to represent diversity to commemorate the 39th anniversary of the rainbow flag.

Baker never sought a trademark on the flag because he considered it “his gift to the world,” friend Cleve Jones said. “He told me when the flag first went up that he knew at that moment that it was his life’s work.”