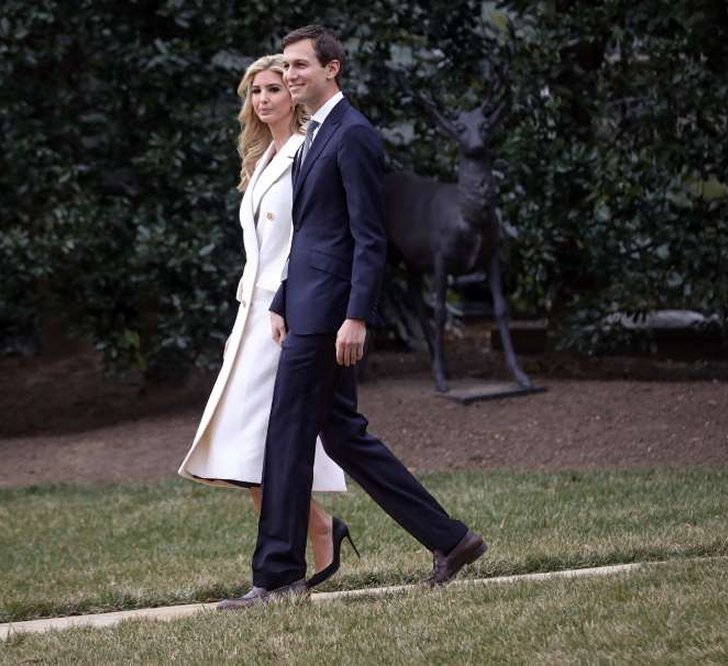 Ivanka Trump and Jared Kushner, President Trump’s daughter and son-in-law, will remain the beneficiaries of a sprawling real estate and investment business still worth as much as $741 million, despite their new government responsibilities, according to ethics filings released by the White House Friday night.

Ms. Trump will also maintain a stake in the Trump International Hotel in Washington, D.C. The hotel, just down the street from the White House, has drawn protests from ethics experts who worry that foreign governments or special interests could stay there in order to curry favor with the administration.

It is unclear how Ms. Trump would earn income from that stake. Mr. Kushner’s financial disclosures said that Ms. Trump earned between $1 million and $5 million from the hotel between January 2016 and March 2017, and put the value of her stake at between $5 million and $25 million.

The disclosures were part of a broad, Friday-night document release by the White House that exposed the assets of as many as 180 senior officials to public scrutiny. The reports showed the assets and wealth of senior staff members at the time they entered government service.

Those disclosures included the assets of Gary D. Cohn, the former president of Goldman Sachs who now leads the National Economic Council, and Stephen K. Bannon, the chief strategist to the president.

Mr. Bannon disclosed $191,000 in consulting fees he earned from Breitbart News Network, the conservative media organization, $125,333 from Cambridge Analytica, a data firm that worked for the Trump campaign, and $61,539 in salary from the Government Accountability Institute, a conservative nonprofit organization. All three are backed by Robert Mercer and his daughter Rebekah, financiers and major Republican donors.

Mr. Bannon’s most valuable asset was Bannon Strategic Advisors Inc., a privately held consulting firm into which income from his other investments appeared to flow. It was valued at between $5 million and $25 million. He also held bank accounts valued at up to $2.25 million, and rental real estate worth as much as $10.5 million.

Mr. Cohn is far wealthier, with assets valued between $253 million and $611 million, and income last year as high as $77 million. Another White House official, Reed Cordish, who heads up technology initiatives, accumulated assets as a Maryland developer valued as high as $424 million.

Mr. Trump’s administration is considered the most wealthy in American history, with members of his senior staff and cabinet worth an estimated $12 billion, according to a tally by Bloomberg. The Friday filings will add voluminous detail to that top-line figure.

“I think one of the really interesting things that people are going to see today — and I think it’s something that should be celebrated — is that the president has brought a lot of people into this administration, and this White House in particular, who have been very blessed and very successful,” said Sean Spicer, the White House press secretary. The officials “have given up a lot to come into government by setting aside a lot of assets,” he said.

Among the most blessed is Mr. Kushner, who was until January the chief executive of Kushner Companies, a family-run real estate investment firm with holdings across the country, a growing business that has taken part in at least $7 billion of acquisitions over the past decade.

Late Friday, the White House released details of the plan devised by his advisers to avoid conflicts of interest between Mr. Kushner’s government role and the wide-ranging business empire he ran with his father. That business depends on foreign investment from undisclosed sources, as well as billions of dollars in loans from the world’s biggest financial services firms.

Although Mr. Kushner has stepped down from his management positions at the more than 200 entities that operated aspects of the family real estate business, he will remain a beneficiary of the vast majority of the business he ran for the past decade, through a series of trusts that already owned the various real estate companies.

The plan laid out on Friday “is not sufficient,” said Larry Noble, a former general counsel and chief ethics officer for the Federal Election Commission. “While removing himself from the management of the businesses is an important step, he is still financially benefiting from how the businesses do. This presents potential for a conflict of interest. Given his level in the White House and broad portfolio, it’s hard to see how he will recuse himself from everything that may impact his financial interest.”

While the filing discloses Mr. Kushner’s personal lenders, it does not provide information on his business partners or lenders to his projects.

His real estate firm has borrowed money from the likes of Goldman Sachs, the Blackstone Group, Deutsche Bank and the French bank Natixis. It also received loans from Israel’s largest bank, Bank Hapoalim, which is the subject of a United States Justice Department investigation into allegations that it helped wealthy Americans evade taxes using undeclared accounts.

Most recently, his firm’s flagship property at 666 Fifth Avenue in Manhattan was the subject of controversy: At about the time his father-in-law received the Republican nomination last spring, Mr. Kushner’s firm began conversations with a Chinese company with ties to some of the Communist Party’s leading families about a plan to invest billions of dollars in the troubled office tower.

Mr. Kushner’s company and the firm, Anbang Insurance Group, agreed to end the talks on Wednesday after weeks of negative publicity about the deal, criticized as a bailout of the Kushners. The building had already been rescued by a number of prominent firms, including the private equity giant Carlyle Group, and Zara, the Spanish fashion retailer founded and owned by Amancio Ortega, one of the world’s wealthiest men.

Mr. Kushner has divested his stakes in any businesses connected to that property.

The disclosures do not reveal the names of investors and lenders to ventures that Mr. Kushner is retaining a stake in. For example, the form shows Mr. Kushner is retaining a stake in a limited liability corporation that owns a Trump-branded luxury rental high-rise building in Jersey City, New Jersey, worth as much as $5 million. That project was financed with tens of millions of dollars from wealthy Chinese investors through a controversial visa-for-sale program called EB-5.

However, the filing does not disclose the names of any of those investors — or partners in any of his other projects.

“He could have foreign business partners who have a real interest in policy, and he may be advising the president on those policies,” Mr. Noble added. “This is a dark area where we just don’t know what’s going on.”

In all, the Kushner company owns more than 20,000 apartments and approximately 14 million square feet of office space.

Previous disclosures by the United States Office of Government Ethics showed that Mr. Kushner had divested his interests in several entities, mostly partnerships connected to a venture capital firm run by his brother, Joshua, called Thrive Capital, that invests in technology firms like Instagram.

He also shed his interests in a funds run by the private equity giant Blackstone Group — whose chief executive officer, Stephen A. Schwarzman, is an economic adviser to Mr. Trump — as well as BlackRock, the world’s largest asset manager.

Over all, he has shed his stakes in 58 businesses.

He is still the sole primary beneficiary of a majority of the trusts that will retain assets, with his children as the secondary beneficiaries.

Mr. Kushner was required to submit some limited financial information for his wife, Ms. Trump, who will continue to receive payments from the Trump Organization as well as her fashion brand.

Ms. Trump, who now serves as an assistant to the president, resigned from her leadership roles at both companies. Instead of performance-based payments, Ms. Trump will receive fixed payments from T International Realty, the family’s luxury brokerage agency, as well as fixed fees from two entities related to real estate projects, the documents show.

Ms. Trump had previously rolled her fashion brand into the Ivanka M. Trump Business Trust, which is overseen by her brother-in-law, Josh Kushner, and sister-in-law, Nicole Meyer. The documents released on Friday valued the trust at more than $50 million.

The brand is largely a licensing operation, meaning that it sells the use of Ms. Trump’s name to partners who manufacture her clothes, shoes and other accessories. Since it is privately held, little is known about the company’s financials, but The Times has previously reported that revenues were roughly between $4 million and $6 million in 2013, before the debut of a major partnership.

The disclosure forms released Friday for less senior White House staff members were not reviewed by the federal Office of Government Ethics. Only the White House Counsel’s Office examines their assets to determine if there are potential conflicts, and decide what steps employees must take to sell assets, resign positions or recuse themselves from decisions.

Already, a complaint has been filed against at least one White House staff member for taking actions that might benefit his own financial interests. Christopher P. Liddell, an assistant to the president and the director of strategic initiatives, had been the chief financial officer of companies including Microsoft, International Paper and General Motors before taking his White House job. Until recently, he also owned stock in General Motors, according to disclosure forms, among more than 750 other companies.

But in late January and early February, according to a complaint filed by Citizens for Responsibility and Ethics in Washington, Mr. Liddell participated in meetings that involved several of the companies in which he still owned a total of about $2 million in stock, including International Paper and General Motors. Mr. Liddell, according to disclosures, sold these stock holdings by mid-February.

“It is Ethics 101 — the most basic thing you are not supposed to do: using your official capacity to benefit your financial interest,” said Norman Eisen, who served as a White House ethics lawyer during the Obama administration and now is a co-chairman of Citizens for Responsibility and Ethics in Washington.

The White House did not respond Friday when asked about the complaint.