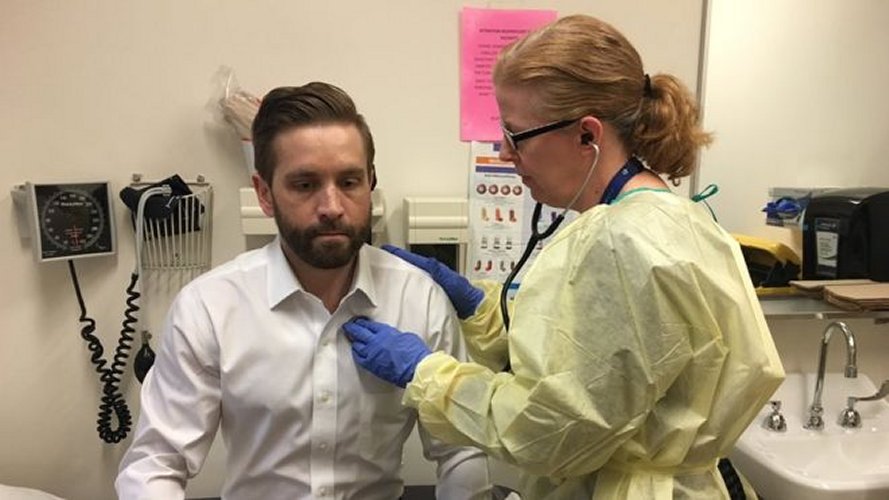 Canadians are outliving Americans, in some cases, by as much as a decade. Is public healthcare the secret to longevity?

When Erick Bauer was first diagnosed with cystic fibrosis (CF) as an infant, his parents were told he’d be lucky to make it to his 20th birthday.

Now turning 32 and expecting his first child, Mr Bauer attributes his relatively good health to the close relationship he has with his medical team at St Michael’s Hospital in Toronto, which he says helps him maintain a healthy and active lifestyle.

He takes about 60 pills a day to help control the hereditary disease, which can affect the lungs, pancreas and gastro-intestinal tract.

“For all those younger CF patients who live with the disease right now, it is really important to just keep searching for that cure or that control for that disease,” he told the BBC. “That is my hope for the future.”

Life expectancy for cystic fibrosis patients has increased much faster in Canada than it has in the US, a new study published this month in the Annals of Internal Medicine found.

Canadians living with cystic fibrosis lived on average 10 years longer than Americans with the same disease, in part because of the very different healthcare systems in the two countries, the study found.

Why do Americans die younger than Canadians?

When severity of disease, age and other variables were taken into account, Canadians had a 34% lower death rate than American patients overall.

“I think there may be some sort of inherent differences in the systems themselves, but teasing it out is hard,” says Dr Anne Stephenson, lead author of the study and a researcher at St Michael’s Hospital.

The results of the study did not come as a surprise to Michelle Brotherwood, a registered dietician who spent years working with children with cystic fibrosis in Canada and the US.

The differences, she says, were striking.

“In Canada, I make clinical decisions. I look at their case and I decide whether or not they would benefit from meeting with me. There, the decision is driven by their insurance,” she says.

Ms Brotherwood says she had to forgo seeing patients who were in real need, just because they did not have the coverage.

Sometimes, she’d consult with patients who were thriving and did not necessarily need a dietician, simply because their plan covered it.

Even when they were insured, high co-pays meant that some families had to reduce the amount of medication they used, or avoid going to the hospital, she says.

Many researchers have suggested that this profit motive, and the strain it puts on families, may be to blame for the average lower life expectancy in the US.

Although the decade-long Canadian advantage seen in cystic fibrosis study is striking, numerous studies have shown that Canadians tend to outlive their American counterparts.

According to the World Health Organization (WHO), Canadians live almost three years longer than Americans overall.

This difference can be observed in a variety of diseases.

Dr PJ Devereaux, a researcher at McMaster University, says that studies of patients with end-stage renal failure show that Canadians live longer than Americans because the quality of care is better. He says for-profit health clinics in the US spend more on marketing, and less on qualified staff.

“You do not have to be a healthcare expert to recognise that a huge determinate of how you or your loved one will do depends on the quality” of healthcare providers, Dr Devereaux says.

But Erin Strumpf, who researches public health at McGill University in Montreal, says it is not so simple.

With so many factors affecting health, such as lifestyle and genetics, it can be difficult to draw broad conclusions about why Canadians live longer. Rates of obesity and smoking, and socioeconomic factors may all impact the different outcomes we see in the US.

“But it is a challenging thing, to really understand what causes those differences.”

For Ms Brotherwood, the move back to Canada has been a relief, not because the doctors in Los Angeles were anything but excellent, but because she says she grew tired of spending so much energy fighting with insurance companies, instead of providing care.

“Kids would say to me, or teenagers or young adults, ‘My family is bankrupt because of my cystic fibrosis,'” she says.

That is something JJ Whicker hopes his son, who was diagnosed with cystic fibrosis shortly after being born last year, will never have to face.

A graduate student in Utah, Mr Whicker was concerned he’d have to quit school.

But he has been relieved to find that Medicaid covers almost all of his son’s needs.

As the US government weighs changes to the Affordable Care Act (ACA) and Medicaid, he says he is worried about what the future will hold for families like his who rely on federal programmes to save their children’s lives.

“It is something I think about often,” he says.