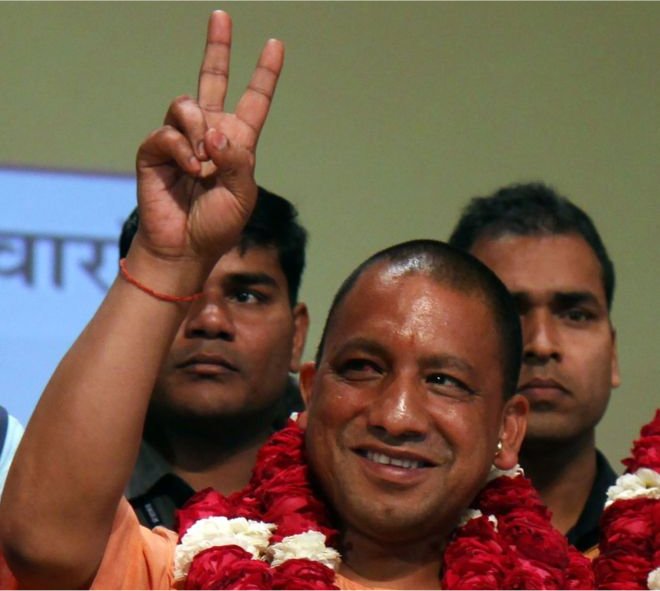 Yogi Adityanath has dominated headlines in India since his appointment as leader of the politically crucial state of Uttar Pradesh. A saffron-robed Hindu priest, he is a highly controversial figure who is loved and hated in equal measure, as the BBC’s Geeta Pandey reports.

At the weekend, Yogi, as he is widely known, returned to a hero’s welcome to the temple town of Gorakhpur for the first time since he was sworn in as chief minister on 19 March.

Overnight, the town turned saffron, the colour of his Bharatiya Janata Party (BJP). All roads leading to Gorakhnath temple were decorated with party flags, marigold flowers and orange balloons.

The smiling new leader, 44, looked down from massive hoardings and posters on buildings, and mannequins outside shops even sported bright saffron outfits.

At a college run by the temple, thousands of people waited for hours to see him. Speakers praised his vision and leadership. “Some people walk in others’ footsteps, some make footsteps for others to walk in,” said one.

A brilliant orator, Yogi Adityanath has been elected MP for Gorakhpur five times since 1998 and the crowds there worship him. Many tell me he’s a “reincarnation of the gods, a God himself”.

But he is also a very controversial leader who has often been in the news for the wrong reasons. Critics describe him as India’s most divisive and abusive politician who used his election rallies to whip up anti-Muslim hysteria.

And some of the statements attributed to him – and his supporters – have been widely condemned.

He accused Muslim men of indulging in a “love jihad” to seduce Hindu women and convert them, he claimed that Mother Teresa wanted to Christianise India, he called for a Donald Trump-style travel ban on Muslims in India and compared Bollywood superstar Shah Rukh Khan to Pakistan-based militant Hafiz Saeed.

At one point, he shared a stage with a supporter who said that when Yogi Adityanath came to power, Muslims would no longer have the right to vote and that supporters would rape dead Muslim women.

His campaign promises included “anti-Romeo squads” to “prevent harassment of Hindu women” and he listed protecting cows and shutting down illegal slaughterhouses as his top priorities.

Religious Hindus revere cows and slaughtering them is illegal in large parts of India, including Uttar Pradesh. In 2015, a Muslim man was lynched by a Hindu mob which alleged that he had stored beef at home.

Yogi Adityanath also faces criminal charges. He has been accused of attempted murder, criminal intimidation and rioting in relation to a clash that took place in 1999. And in 2007, he spent 11 days in jail for making inflammatory speeches.

No wonder then that his surprise elevation has alarmed many in India and around the world, with many expressing concerns that the state’s 40 million Muslims will not have an easy time under his watch.

In an editorial, The Guardian called it a “victory for anti-Muslim bigotry” and the New York Times said Mr Modi was trying to “humour Hindu extremists”. The paper called the move “a shocking rebuke to religious minorities”.

And the negative publicity has continued since he became chief minister. The “anti-Romeo squads” have been accused of harassing and intimidating courting couples in cities and towns, and the authorities have been criticised for forcing abattoirs to shut down, mostly on flimsy grounds.

The press in Gorakhpur, however, has been more complimentary, revelling in the “grand victory” of their hero.

“Local newspapers are writing in great detail about his amazing memory skills, they say he can remember names of thousands of people. Some are talking about how he communicates directly with his 500 cows, monkeys, dogs and birds,” says senior Gorakhpur journalist Kumar Harsh.

“For people here, he’s a celebrity. He’s the chief priest and head of the temple management, which also runs a hospital and colleges. He is very hardworking and is immensely popular with the people,” he adds.

The son of a forest ranger, Yogi Adityanath was born in 1972 in Garhwal (which was then in Uttar Pradesh but is now in Uttarakhand state) and was named Ajay Singh Bisht.

A maths graduate, he moved to Gorakhpur in November 1993 and three months later was appointed heir to Mahant Avaidyanath, the temple’s chief priest and an influential Hindu politician. A vegetarian, he has taken a vow of lifelong celibacy.

Dwarika Tiwari is his deputy at the temple and has worked closely with him since his arrival in Gorakhpur.

“He’s very intelligent, bright and hard-working, he’s efficient, he respects everyone whatever their caste, creed or religion, he respects women and loves children.”

Mr Tiwari concedes he has weaknesses – a tendency for plain speaking and a quick temper.

When I point out the anti-Muslim statements during the campaign, the criminal charges and the fact that he was briefly jailed, Mr Tiwari brushes them aside as “malicious propaganda” and “conspiracy” from his political rivals.

“Muslims respect him equally. They also come to us to resolve their disputes,” he says.

Just outside the temple gates, Muslim shopkeepers insist they are not unduly worried over the appointment.

Cloth merchant Feroz Ahmad says he, in fact, voted for the BJP and now hopes that Yogi Adityanath will bring much-needed development to this backward town.

I ask him what he makes of his rabble-rousing, anti-Muslim statements.

“All politicians say such things to win elections,” he says. “Some of his supporters are troublemakers who do wrong things. But now that he’s in power, it will all stop.”

So can it all be dismissed as mere rhetoric, something he indulged in just to win the election?

Sharat Pradhan, senior journalist in the state capital, Lucknow, says “ever since he’s been named chief minister, he’s been conducting himself very responsibly”.

“In his first days in power, he’s been careful. He’s shown a lot of restraint. He’s trying to be inclusive, he’s even inducted a Muslim into his cabinet.”

He has also been trying an image makeover – paying a surprise visit to a police station one day, visiting an acid attack victim in hospital the next. He has also refrained from commenting on the contentious issue of the Ram temple in Ayodhya despite it being promised in the BJP election manifesto.

“But the worry is with the fringe elements among his supporters. With his rabble rousing, he’s freed the genie from the bottle, now the question is can he control it?” asks Mr Pradhan.

That is precisely what Yogi Adityanath attempted to do when he took the stage in Gorakhpur at the weekend, appealing to his boisterous supporters to behave.

“The prime minister has given me a huge responsibility, to ensure that development reaches the last man. I assure you no-one will be ignored, irrespective of their caste, creed or religion,” he said. “And I need your help to succeed.”

Success, Mr Pradhan says, will depend on whether he can ensure the first six months of his rule are trouble-free. Then he can build his future.

“At present Mr Modi is number one in the party, the others are number nine. There’s no-one in between. Yogi Adityanath can be number two.