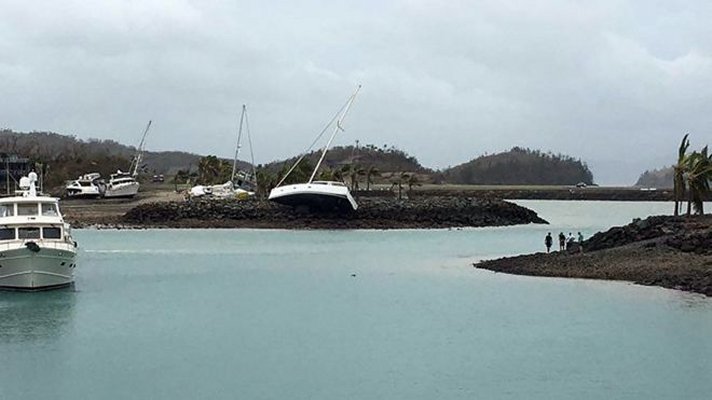 The cyclone struck the Queensland coast as a category four storm, carrying winds of up to 263km/h (163 mph).

Queensland Premier Annastacia Palaszczuk said some damage on land was not as widespread as first anticipated.

Marine experts said they expected to find damage to the reef’s ecosystem, although it would not rival widespread destruction caused by coral bleaching.

The Great Barrier Reef Marine Park Authority said it had not yet been able to assess potential damage caused by the storm.

But the authority’s director, Dr David Wachenfeld, said he feared the cyclone’s impact because it had been large, intense and slow-moving.

“Those three things together tend to be the characteristics of a cyclone that causes relatively high damage to the ecosystems of the Great Barrier Reef,” he told the BBC.

Although cyclones are normal in the area, the effects of climate change are believed to be increasing the frequency of severe cyclones, he said.

“This is really testing the resilience of the Great Barrier Reef ecosystem.”

Marine ecologist Dr Joshua Madin, from Macquarie University, said although the cyclone’s damage would be “patchy”, it was still cause for concern.

“It’s likely to have caused a lot of damage,” he said.

“You start to see a lot of grow-back after 10 to 15 years, but some of these coral are hundreds of years old.”

“The path of a cyclone is about 100km wide so it will have had an impact locally on the reefs that is passed over,” Prof Hughes said.

“The bleaching event is much larger in scale.”

The experts said cyclones could also have a positive effect by cooling water down, although this might be negligible.

“It will cool the water temperature down by a degree or so but it’s not going to rescue bleached coral,” Prof Hughes said.

Towns remained cut off on Wednesday after being pummelled by the powerful cyclone. Yachts were washed ashore and roofs torn off houses.

Debbie has since been downgraded to a tropical low system but Australia’s Bureau of Meteorology has still warned of strong wind gusts and heavy rain.

“This rainfall is likely to lead to major river flooding over a broad area this week,” it said.

The bureau said that some areas had been drenched with the equivalent of half a year’s worth of rain – “a phenomenal” 1,000mm (39 inches) – in just 48 hours.

Ms Palaszczuk, who flew to Bowen, one of the worst-hit towns, said mass evacuations helped save lives.

“Thankfully the extent of the damage here is not as widespread as we first anticipated, but of course there are lots of trees down… we’ve seen the impact of roofs being blown off people’s houses,” she said.

Three people had been confirmed injured, but that number could rise, Ms Palaszczuk said.

She urged insurance companies to “treat people with respect” following the disaster, saying 63,000 homes were without power.