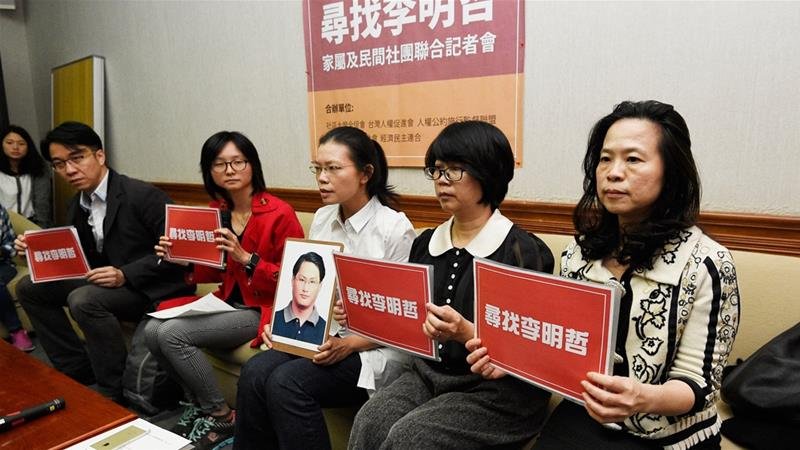 Lee disappeared on March 19 after clearing immigration in Macau. He never showed up for a planned meeting later that day with a friend across the border in China’s city of Zhuhai.

Chinese authorities said Lee was in good health, but gave no information about where he was being held or other terms of his detention.

“Regarding Lee Ming-che’s case, because he is suspected of pursuing activities harmful to national security, the investigation into him is being handled in line with legal procedures,” Ma told reporters.

Ma said Taiwanese people coming to China for “normal” activities did not have anything to worry about and their rights would be protected.

“The mainland has rule of law,” he said. “On this point, Taiwan compatriots can rest at ease.”

Cheng Hsiu-chuan, president of a Taipei college where Lee worked, told the Associated Press news agency on Tuesday that Lee may have attracted the attention of Chinese security after using the Chinese social media service WeChat to “teach” China-Taiwan relations to an unknown number of people.

“For China, the material he was teaching would be seen as sensitive,” Cheng said.

He added that Lee had travelled annually to China for the past decade to see friends, saying he would discuss human rights in private but had never held any public events there.

However, in mid-2016 Chinese authorities shut down Lee’s WeChat account and confiscated a box of books published in Taiwan on political and cultural issues, Cheng said.

“According to the news we’ve gotten, the state security bureau there doesn’t know how to handle Lee’s case,” Cheng said.

Taiwan’s presidential spokesman Alex Huang said on Tuesday that the Mainland Affairs Council had “engaged” and that it will do its “best”.

She added that her husband might be in need of hypertension medicine.

China and Taiwan split amid civil war in 1949. China insists the two sides must eventually unify – by force if necessary.