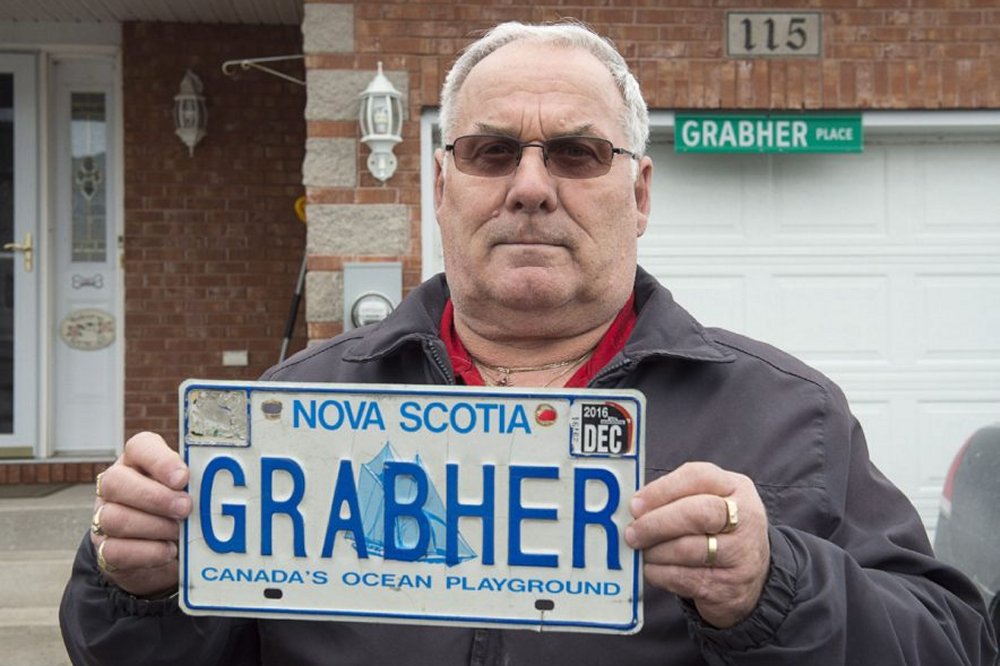 Lorne Grabher said he has no problem getting a “GRABHER” license plate for his father in 1991, but in December he received a letter from the Nova Scotia Registrar of Motor Vehicles saying his own vanity plate was being revoked after a complaint.

He said the letter branded his license plate “socially unacceptable” because it can be read as “grab her,” which could be seen as promoting violence against women.

“While I recognize this plate was issued as your last name, the public cannot be expected to know this and can misinterpret it as a socially unacceptable slogan,” Janice Harland, road safety director at the Registrar of Motor Vehicles, said in a letter to Grabher.

Grabher said his son has a license plate bearing the family’s last name in Alberta.

“Where does the Province of Nova Scotia and this government have a person with that kind of power to discriminate against my name?” he told CTV News.

Brian Taylor, a spokesman for the Department of Transportation, elaborated on the province’s objection to the plate in an email to CBC News.

“A complaint was received outlining how some individuals interpret [the name] as misogynistic and promoting violence against women,” Taylor wrote. “With no way to denote that it is a family name on the plate, the department determined it was in the public’s best interest to remove it from circulation.”

Grabher said no one has ever complained to him about the plate.

Grabher wondered whether the objections to his plate stemmed from the infamous recording released during last year’s U.S. presidential election, featuring Donald Trump using the phrase “grab her” in a vulgar fashion.

He said he shouldn’t be punished for the now-president’s actions.

“Donald Trump is a totally different person. He’s ignorant. He doesn’t care about anybody and I shouldn’t be put in a class like him,” Grabher said.

Grabher said he is considering a legal challenge to get his plate back. In the meantime, he said he is putting one of his son’s Alberta plates on the front of his car.

“I’m proud of it and as far as I know in Nova Scotia we’re allowed to put whatever we want on the front of the car,” he said.

UAE driver discovers roadside police car is not what it seems