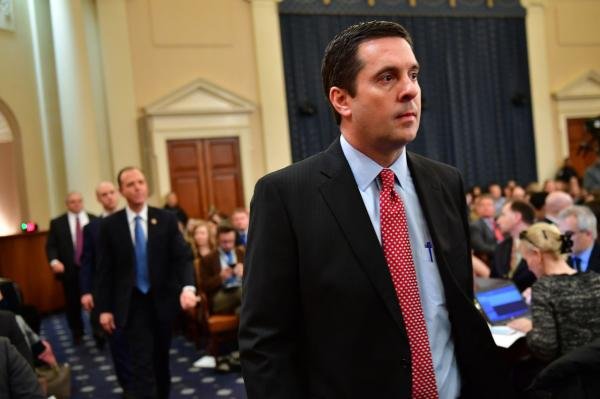 The ranking Democrat on the House Intelligence Committee said late Monday that its chairman should remove himself from the panel’s investigation into Russian election interference and potential ties between the Kremlin and President Donald Trump’s campaign.

Rep. Adam Schiff, D-Calif., said chairman Devin Nunes’ actions last week — announcing that some members of the president’s team had been caught up in incidental U.S. intelligence gathering — demonstrate that he cannot objectively participate in such inquiries.

“After much consideration I believe Chairman should recuse himself from involvement in investigation/oversight of Trump campaign & transition,” Schiff tweeted Monday evening.

Nunes first told reporters about the surveillance, and then Trump, but never any members of the committee. When pressed on Friday, he said he felt a “duty” to tell the president and House Speaker Paul Ryan — but not members of his panel — due to “relentless” political attacks by Democrats.

“There was no legitimate justification for bringing that information to the White House instead of the committee,” Schiff said.

In the days that followed Nunes’ disclosure, questions mounted about what the information contained and where it came from. Monday, the chairman said he went to the White House grounds early last week to view classified reports that detailed the surveillance — a revelation that set off even more alarm bells for Democrats.

“That [the information] was also obtained at the White House makes this departure [from standard procedure] all the more concerning,” Schiff said. “In the interests of a fair and impartial investigation, whose results will be respected by the public, the Chairman’s recusal is more than warranted.”

“Chairman Nunes met with his source at the White House grounds in order to have proximity to a secure location where he could view the information provided by the source,” Langer said.

However, there are a number of locations in Washington, D.C., that offer the same access — leading some to wonder if the location of the meeting indicates the information came from inside the White House.

“Who is he meeting with?” Sen. Mark Warner, D-Va., vice chairman of the Senate Intelligence Committee, asked Meet the Press host Chuck Todd Sunday, saying it’s “more than suspicious” that Nunes went to the White House to fetch the information. “Was it a source, or somebody from the administration?”

The White House said Monday it was not aware of Nunes’ presence on the grounds last week, and directed all questions to the chairman himself.

All non-White House personnel, however, must be cleared and accompanied by someone whenever they are allowed on the grounds — a stipulation that makes it seem unlikely that none of Trump’s staffers knew about Nunes’ presence there.

CNN also cited a government official saying they saw Nunes in the National Security Council offices of the Eisenhower building, which is officially on the White House grounds, on Tuesday night.

“Whatever it is he’s done, it has been at the White House, it appears to have been in the service of the White House, and so, it is very clear that he owes us an explanation,” Rep. Jim Himes, D-Conn., said.

Some observers say Nunes receiving the information from a White House source could also explain why Nunes told reporters before he informed the president.

Nunes said in his announcement that the intelligence gathering that snagged communications of the president’s team appeared to be legal and incidental, but he expressed concern about the way it was disseminated after the fact.

Senate Minority Leader Charles Schumer said Monday that Ryan should replace Nunes for the Russian investigation in order for it to hold any credibility. Multiple other members of the House Intelligence Committee echoed Schiff’s call for Nunes’ recusal. Some have called for his resignation as panel chairman.

“Chairman Nunes should no longer be anywhere near this investigation, let alone leading it,” Rep. Eric Swalwell, D-Calif., the ranking member of an intelligence subcommittee, said.

Some critics wonder if Nunes’ handling of the matter is the result of a man eager to work his way into the president’s good graces. The California Republican, though, insists that he’s only trying to protect American citizens caught up in government surveillance from being “unmasked.”

After hearing about Nunes’ announcement, Trump told reporters he felt “somewhat” vindicated for his charge earlier this month that former President Barack Obama had his Manhattan headquarters wiretapped in the run-up to the presidential election. However, Obama and numerous former and current government officials, including Nunes himself, have debunked that claim.

Large bale of marijuana washes up on Florida beach