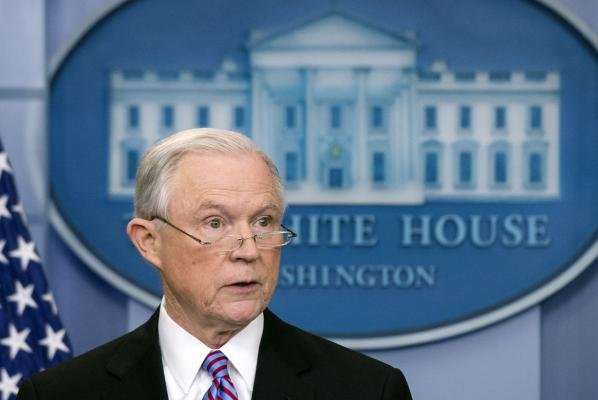 “Such policies cannot continue. They make our nation less safe by putting dangerous criminals back on the streets,” Sessions said in the White House press briefing room. “Today, I am urging states and local jurisdictions to comply with these federal laws.”

“Sanctuary cities” refuse to work with Immigration and Customs Enforcement officials in enforcing immigration laws, including allowing ICE to take custody of the illegal immigrants for possible deportation. Under federal law, they are required to notify ICE when an illegal immigrant is in custody.

More than 140 jurisdictions have been designated as sanctuaries, including 37 cities.

“LAPD has never participated in programs that deputise local law enforcement to act as immigration agents, and on my watch they never will,” Los Angeles Mayor Eric Garcetti said last week at a news conference where he signed an executive order that ordered polic who patrol Los Angeles’ airport and port to follow the Los Angeles Police Department policies.

Other big cities that refuse to cooperate with the federal government on immigration include New York, Chicago, San Francisco and Seattle.

Maryland is considering legislation to make it a sanctuary state.

“That would be such a huge mistake,” Sessions said. “I would plead with the people of Maryland to understand this makes the state of Maryland more at risk for violence and crime, that it’s not good policy.”

Sessions said states and localities that want to receive grants from the department’s Office of Justice Programs will need to comply with the law.

More than $4.1 billion will be awarded this year, Sessions said.

During the campaign, President Donald Trump advocated for a crackdown on “sanctuary cities.”

After taking office, Trump issued an executive order that gave the administration the power to limit grants to “sanctuary cities.”

Large bale of marijuana washes up on Florida beach