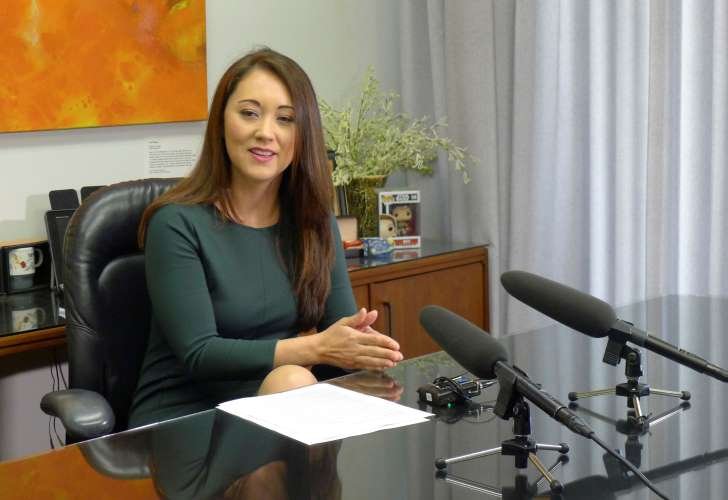 A Hawaii lawmaker who says she was pressured to give up her leadership post at the statehouse after criticizing President Donald Trump resigned Wednesday from the Republican Party.

Rep. Beth Fukumoto said members of the GOP refused to oppose racism and sexism including a suggestion by Trump to create a Muslim registry during his campaign.

“As a Japanese-American whose grandparents had to destroy all of their Japanese artifacts and items and bury them in the backyard to avoid getting taken and interned, how could I not have said anything?” Fukumoto asked. “And how could my party have not said anything?”

Fukumoto was voted out of her post as House Minority Leader in February after calling Trump a bully in a speech at the Women’s March in Honolulu, saying many of his remarks were racist and sexist and had no place in the Republican Party.

Since then, she sought feedback from her constituents about leaving the GOP and said three-quarters of the more than 470 letters she received supported the move.

She said she agrees with many Democratic positions on affordable housing and equitable taxes, and hopes to join that party.

Hawaii Democratic Party leader Tim Vandeveer said Democrats will give Fukumoto a fair shake, but some members are concerned about her past voting record on civil rights and women’s issues.

“Changing political parties is not like changing jackets, just because the weather’s better on our side of the street,” Vandeveer said.

Fukumoto voted against same-sex marriage when it came before the Legislature in 2013. She said Wednesday she voted that way to represent the majority of her constituents, but if she was voting on her own, she would have voted yes.

On reproductive rights, Fukumoto said she does not believe in abortion in all three trimesters but does not want to rescind individuals’ rights once they have been granted.

“We have choice laws in Hawaii and I’m not looking to repeal those laws,” she said.

Members of the Democratic Party on Oahu will ultimately decide whether to accept Fukumoto, but the process could take months, Vandeveer said.

Fukumoto said she’s received letters of encouragement from Democrats and Republicans in nearly every state.

Democratic U.S. Sen. Brian Schatz welcomed her to the party in a tweet, saying he’s proud of her courage.

Republican state Rep. Cynthia Thielen, a Fukumoto ally who voted against removing her from leadership, said, “the tiny party’s brand is further weakened and its relevance to the wider, diverse constituency looks bleak.”

Hawaii Republican Party Chairman Fritz Rohlfing declined to immediately comment because he had not yet reviewed Fukumoto’s resignation letter.